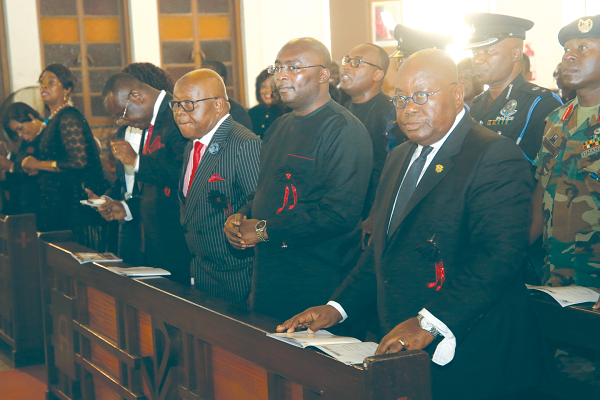 The Ghana Bar Association (GBA), in collaboration with the Judicial Service, on Friday held the 36th Remembrance Day Service for three justices of the High Court who were abducted and murdered in June,1982.

Their charred bodies were found at the Bundase Military Range in the Accra Plains.

Present at the solemn service which was held at the Holy Spirit Cathedral in Accra, were President Nana Addo Dankwa Akufo-Addo and his vice, Dr Mahamudu Bawumia, the Speaker of Parliament, Prof. Mike Aaron Oquaye, the Chief Justice, Ms Sophia Akuffo and the President of the Ghana Bar Association, Mr Benson Nutsukpui.

Also in attendance were judges from the lower courts, right up to the Supreme Court, members of the Bar and some staff of the Judicial Service.

Reading the trajectory of events that led to the heinous killing of the judges, the President of the GBA said the widespread condemnation of the crime led to the setting up of a special investigation board.

Mr Nutsukpui stated that in response to the call for reconciliation by the National Reconciliation Commission (NRC) and the biblical injunction that past trespasses must be forgiven, the Justices had forgiven the wrongdoers for their cowardly and evil deeds.

“But we still remember these martyrs of the Rule of Law and will continue to celebrate them. The Bar and the Bench acknowledge and proclaim those good qualities and deeds for which they were murdered”, he said, adding that the country over the years had made strides in the democratic process.

He said without access to speedy and effective justice, persons, especially the vulnerable, could not make their voices heard, exercise and protect their rights or hold people in authority accountable.

Mr Nutsukpui said he had received complaints from some lawyers about threats on their lives for defending certain accused persons and explained that lawyers played those roles in their efforts to have the laws and rules respected and defended.

Preaching the sermon based on John 9:1-4 of the Holy Bible which spoke about the day giving way to night, the District Minister of the Tema North District, Presbyterian Church of Ghana, Rev. Dr George Kwapong, said the three slain judges worked very hard and well when they had the opportunity to serve their country and advanced the cause of the rule of law to the best of their ability.

Dr Kwapong added that the judges stood for the rule of law and were not blindfolded by anything to veer off upholding justice.

He told the congregation that those in position of authority or working in any capacity, should know that they would give accounts of their stewardship to the Almighty God.

He said the expose´ by investigative journalist, Anas Aremeyaw Anas, was just an indication of what would happen on judgement day, because on that day just as Anas was able to use hidden cameras to record bad deeds, God would play back both the good and bad things done in closet by every person.