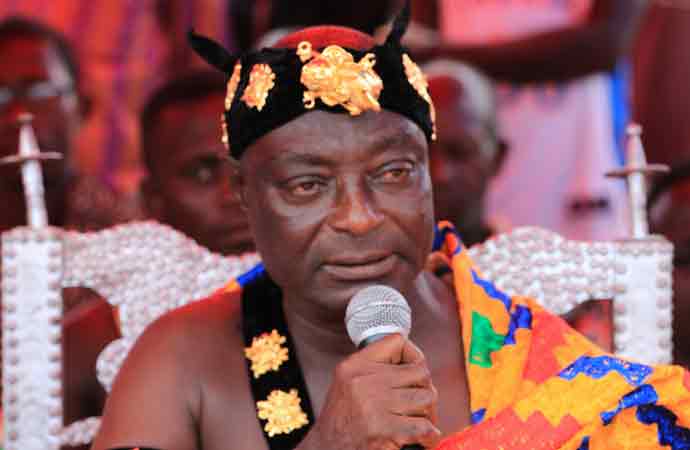 “Ghana, Asankragwaman, Wassa Amenfiman, and Enchi man are grateful to you. If God had not made you President, all our water bodies would have been destroyed by now. Before you came into office, there was no way we could drink from our rivers and streams. However, today, as a result of your fight against galamsey, we are able to do so. We thank you, President Akufo-Addo, and your government for making this possible.”

These were the words of the Chief of Asankran-Breman, Nana Kwabena Amenemah II, on Saturday, 9th June, 2018, when the President of the Republic, Nana Addo Dankwa Akufo-Addo, visited Breman, in the Amenfi West constituency, to cut the sod for the construction of the 25 kilometre Asankragwa-Fordjuorkrom road.

With President Akufo-Addo having disclosed, on Friday, 8th June, 2018, at Kojina, in the Bibiani/Anhwiaso/Bekwai constituency, that a decision on government’s ban on small-scale mining would be made soon, the Breman Chief was confident that the days of miners destroying water bodies and lands were over.

“We are certain that the policies and measures you are putting in place, during the period of the ban on small scale mining, will mean that the destruction of our water bodies and vegetation by miners will end. As Chiefs, we will also make sure that small scale miners do not destroy our lands or pollute or water bodies,” Nana Kwabena Amenemah II.

Touching on the achievements of the Akufo-Addo government in one and half years of being in office, the Chief of Breman noted that all of Breman, Wassa Amenfi, and, indeed, all of Ghana, are aware of the work President Akufo-Addo has done.

“The amount of work undertaken, and the achievements chalked by this government in just one and half years of being in office, surpasses the 4-year work done some other government,” Nana Kwabena Amenemah II said, to a rousing applause of approval from the gathering.

The Chief noted that President Akufo-Addo’s government, school-going children who had completed Junior High School, and as a result of financial difficulties, were unable to continue their education.

Again, the Chief commended President Akufo-Addo for upgrading Amenfi West from a district to a municipality, and fulfilling his campaign pledge of constructing the 25 kilometre Asankragwa-Fordjuorkrom road, adding that “no government in the history of Ghana has done the things President Akufo-Addo has done.”

The Chief continued, “Today, as a result of his achievements, I, Nana Kwabena Amenamah II, Chief of Asankran-Breman, confer the title of ‘Oseadeayor’ to the name of President Akufo-Addo. He has said it, and he has done it. So, from today, he is called Oseadeayor Nana Addo Dankwa Akufo-Addo I. We are very satisfied with your government.”

Whilst not “engaging in politics”, Nana Kwabena Amenemah II stated that “we are all witnesses to what you have done, and, together, we will ensure the longevity of your government, so that your policies and programmes benefit the Ghanaian people.”