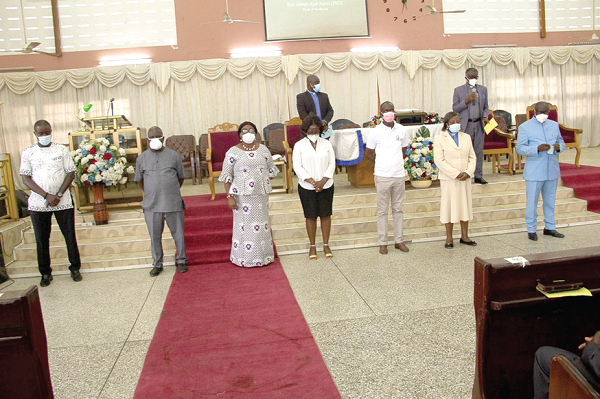 The Ga West Presbytery of the Presbyterian Church of Ghana (PCG) has launched a series of activities to commemorate its fifth anniversary.

The anniversary is being celebrated on the theme; “Oh, Give thanks to The Lord for He is good” (Psalm 118:1).”

The Ga West Presbytery was carved out of the Ga Presbytery in June 2015.

A line up of programmes for the celebration, which is scheduled to begin from April and end in July this year, include a photo exhibition and viewing of documentaries on the various districts within the Ga Presbytery, a media encounter, youth quiz, charity donations, a 24-hour prayer session and a music festival.

The anniversary festivities will be climaxed with an awards event and a thanksgiving service on July 18.

The launch of the anniversary celebrations took place last Sunday at the Salvation Congregation of the Presbyterian Church at New Achimota in Accra.

He encouraged the congregation in the presbytery to use the occasion to also reflect on the years gone by and forge ahead with high hopes into the future.

Rev Nyarko highlighted the successes the Presbytery had achieved since its inception and maintained that winning souls for Christ and evangelism were the core mandates of the church.

He expressed his appreciation  to the Gbawe, Ablekuma and Asofan districts of the Presbyterian Church for contributing and working hard to support the Ga West Presbytery.

He commended the presbytery council, district ministers, catechists, directors, committees and the laity for also contributing to the success of the Ga West Presbytery.

A planning committee was also introduced at the launch and charged with the responsibility of ensuring that all the proposed activities were successfully executed.

The Clerk of the Ga West Presbytery, Rev Joseph Kofi Antwi, said the committee had been selected to bring their expertise to bear in planning a memorable celebration.

Rev Kwadwo Owusu Sarpong, who spoke on behalf of the anniversary committee, commended the leadership of the Ga West Presbytery for the confidence reposed in them and promised that the committee would live up to expectation.