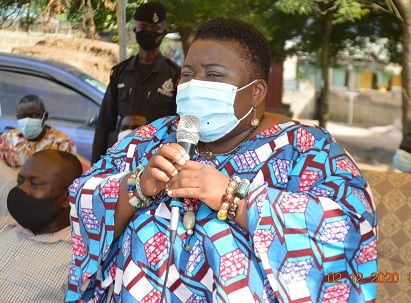 The Ga North Municipal Assembly (GNMA) has cut sod to for the commencement of work on a two-storey educational facility at Abensu.
The 6-unit classroom block which will accommodate basic school students has a staff common room, washrooms and other ancillary facilities.

MCE’s remarks
Hon. Gertrude Ankrah, the Municipal Chief Executive (MCE), speaking at a brief ceremony held on  at Abensu Quarters yesterday, noted that the structure would ensure easy access to education by pupils in the Abensu community.
“This forms part of efforts aimed at encouraging ease of access to education within the municipality by creating a conducive environment for teaching and learning,” she added.
She said creating an enabling environment for effective teaching and learning was the topmost priority of the government, adding that the government had  decided to use part of the assembly’s common fund to provide educational infrastructure for the Abensu community which had never had a public school in its entire history.

“Today, we are cutting sod for work to begin, it is part of the good works of President Nana Addo Dankwa Akufo-Addo who has prioritised education and had initiated several policies to not only improve teaching and learning but also to make education more attractive and accessible to Ghanaians,” she noted.

Disappointment in community
The MCE, however, expressed disappointment that the community since time immemorial had been accommodating staff and workers of the Agric sector yet it lacked many developmental facilities for the benefit of staff and students.
She expressed how challenging it was  acquiring land for assembly developmental projects within the Abensu community.
“ Upon completion of the project, all necessary furniture will be procured.  The school feeding programme will be extended to the school to improve enrolment, attendance and retention,” she noted.

MP’s remarks and appeal
Hon. Moses Anim, the Member of Parliament for Trobu Constituency, who is a resident of the community assured the community that measures were being taken to address some of the glaring road challenges facing the community while access roads to other neighbouring communities would start.

He said works on the dilapidated Abensu - Pokuase Teacher Kope footbridge would soon receive the necessary attention to avert any pending danger. He appealed to the chiefs and people of the Abensu community to support his 3rd bid in the upcoming election so that initiatives and projects under his term would be completed.

Hon. Nuhu Mohammed, Assembly Member of the Abensu Electoral Area, expressed his appreciation to the Municipal Chief executive and the entire Assembly for their resilience in ensuring that they overcame all challenges they faced in securing land for the school project.
He therefore, appealed to the Ministry of Agriculture to make available part of the Abensu government lands for developmental projects, including the future construction of Junior and Senior High Schools.

This according to him would enable the fast growing community to benefit from government initiatives when the opportunity came.
He urged the contractor to deliver the project on schedule for the benefit of the pupils of the community who he said have had no option than to trek to far distant communities to receive basic education, adding that he was elated that pupils of his electoral area would soon heave a sigh of relief.

He added that the community faced some of the most incredible challenges of access to basic needs such as access to potable drinking water, lack of health centre and poor roads. He appealed to the MCE to assist in securing additional projects for the community and urged for the construction of Junior and Senior High technical school in the community to uplift access to education.
He called on members of the community to maintain peace before, during and after the upcoming 2020 general election.