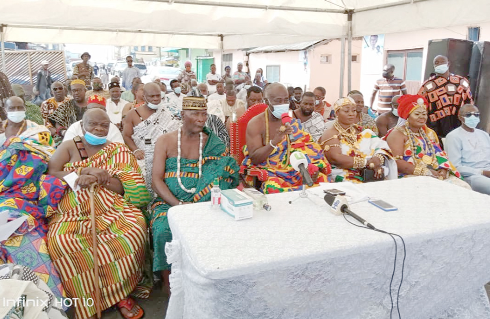 The chiefs and people of Ga Asere, an ethnic group within the Greater Accra Region, have organised a durbar to officially usher in this year's Homowo which starts on August 14.

The brief durbar on the streets of Akoto Lante at James Town in Accra attracted the inhabitants of Asere and descendants of the royal households of Asere in the region.

The Asere Dzasetse and King maker of the Ga-State, Nii Amarkai III, admonished indigenes to prioritise the speaking of the Ga language above all languages.

He bemoaned the fast-erasing dialect of Ga as a worrying situation which would create a lost generation of the Ga state if not tackled.

“You go around and you hear people communicating in other languages in the Greater Accra Region, which is a Ga land. Why is it that no one speaks the Ga language anymore? We will soon become a lost clan," he said.

He urged the elders of the Ga state to make the Ga language a paramount feature of their itinerary whenever they embarked on any official or unofficial duty.

Inaugurating an association named the Royal Clan at the durbar, the Dzasetse tasked the newly formed group to inculcate the Ga culture among the youth in Ga Mashie.

The Seinye of Omanjor, Naa Ahinee Nukpa I, cautioned the public to take the COVID-19 pandemic seriously and practise the necessary protocols to stay alive.

A legal practitioner and the Bubiashie Manye, Naa Amankwah Aduoye I, educated the gathering on the newly enacted Land Act 2020 and cautioned Ghanaians to resort to the proper channels to acquire lands.