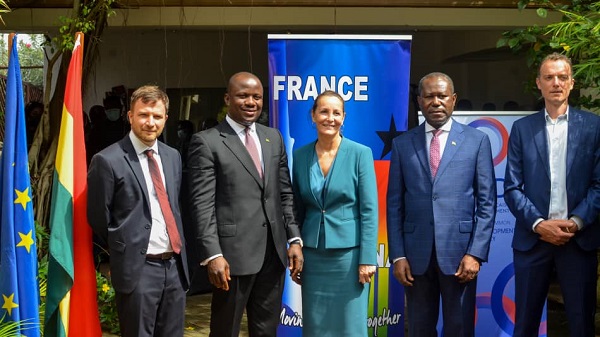 The French Ambassador to Ghana, Mrs Anne Sophie Avé, has commended the Minister of Lands and Natural Resources, Mr Samuel Abu Jinapor, for his boldness and determination to save the environment and reverse the deterioration.

She said immediately the minister was appointed, he launched into action and undertook pragmatic measures that are reversing issues like illegal mining (galamsey) which have been “a pain in the neck” of the country.

The Ambassador who described the minister as her friend made the complimentary comments during the signing of a Memorandum of Understanding for the provision of 1.8 million euros to develop green value chains in and around a number of selected protected areas in the country.

The project known as ‘Phase II of the Econobio’ would generate employment for over 10,000 people at the fringes of forest reserves for the next four years. The French Government through the Agence Francaise De Development has provided Ghana with funding.

The Minister of Lands and Natural Resource, Mr Jinapor signed for the government of Ghana; the French Ambassador, Mrs Avé also signed for the French Government while Mr Nicholas Drunet, initialled for Noe, a French nature conservation NGO.

Just like the first phase, the second one is also a response to threats to the forests reserves and protected areas and reverse the trend while building green businesses for the benefit of the communities.

Mrs Ave said Mr Jinapor had started the galamsey fight “very brilliantly and greatly”, explaining that initially many people had a wait and see attitude thinking that he would hit a snag which was not the case.

“It is very easy to work with someone who is just hyperactive as I am somehow and who shares certain values of boldness, determination. So thank you very much honourable dear friend for what you do for Ghana. It is very easy to help you, we hope we will carry on,” she added.

Speaking earlier, Mr Jinapor commended the ambassador for her support and leadership, which had led to the establishment of a Shea processing facility in Murugu in his constituency of Damongo and added that “The people of Murugu are forever grateful”.

He gave the assurance of the government’s unwavering support to bring the project to fruition, adding that “A person who works to protect the environment, works to protect our planet. That duty is a Godly one. We can, and will mobilise the majority of our population to safeguard our environment and ecosystem.”