The Cape Coast branch of the Unilime Foundation (UF), an organisation committed to humanitarian activities, celebrated this year’s Valentine Day with orphans and children living with autism at the St Elizabeth Special Needs Day Care Centre at Ahotorkrom in the Central Region.

In an interview with the Daily Graphic, last Tuesday, the  President of the branch, Mr Michael Ofori Asare, said the cerebration was the organisation’s second project in the Central Region, to  spend time with the children to put smiles on their faces and to show them much love, stressing that the foundation sought to embark on a lot more projects to change people’s lives and build hopes for deprived people, as well as communities.

He explained that Valentine Day was a season of love and every individual as well as groups could choose to celebrate the season in diverse ways, but they decided to spend the day with orphans, and children living with autism in the home.

The organisation donated items, which included five boxes of Kalyppo, five bags of rice, two cartons of milk, stationeries, toiletries and biscuits worth GH₵ 1,200 to the home. 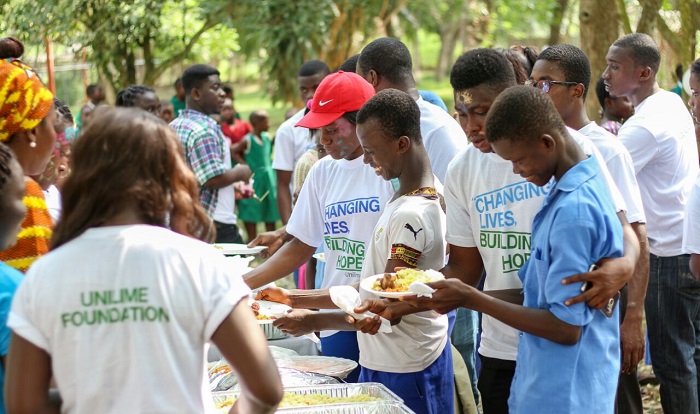 The UF organised a buffet during which they dined and wined with the children and pupils from the Atonkwa R/C Primary and Junior High School (JHS).

Presenting the items on behalf of UF, Mrs Rose Austin Tenadu assured inmates of the continual support of the UF and admonished caretakers to modestly utilise the items in the interest of the children.

“We are your brothers and sisters so we will continue to visit you for you to feel loved and feel part of the society,” she said.

Mrs Tenadu encouraged the inmates and pupils to study hard to achieve their future dreams, and draw closer to God.

The Assistant Manager of the centre, Ms Grace Amankwandor, expressed their appreciation and called on more philanthropists and other non-government organisations (NGO) to support the centre because it had not been easy taking care of the inmates.

Unilime Foundation is a non-governmental, non-partisan and non-profit organisation which aims to produce competent individuals in all fields of endeavours, unearth talents and help the underprivileged in society.

Currently, Unilime Foundation has affiliates in Accra, Kumasi and Cape Coast, which equally aims at impacting on the lives of people, and had organised numerous projects in the area of education and environment.

In a related development, the Women’s Ministries of the Bantama District Seventh Day Adventist (SDA) has presented a number of items to resource the Blessed Child Orphanage at Offinso in the Offinso South Municipality in the Ashanti Region, reports Joseph Kyei-Boateng, Offinso.

The Bantama SDA District Co-ordinator of the Women's Ministries, Mrs Comfort Mpianim, said it was now the turn of the orphanage, as part for the ministries’ schedule to help resource needy homes.

She expressed the belief that almsgiving was a religious act, noting that as mothers and Christians, members of the ministries should not hesitate to support needy orphans in society.

More importantly, she recalled that the ministries held its 2016 Congress at the premises of the orphanage, affording the authorities at the orphanage the opportunity to make known some pressing needs.

The Chief Executive Officer (CEO) of the Blessed Child Orphanage, Madam Mary Osei, who received the items, thanked the ministries for the benevolence and used the opportunity to appeal to other groups and civil society organisations to come to the aid of the orphanage.