Floods cut off communities in Elmina 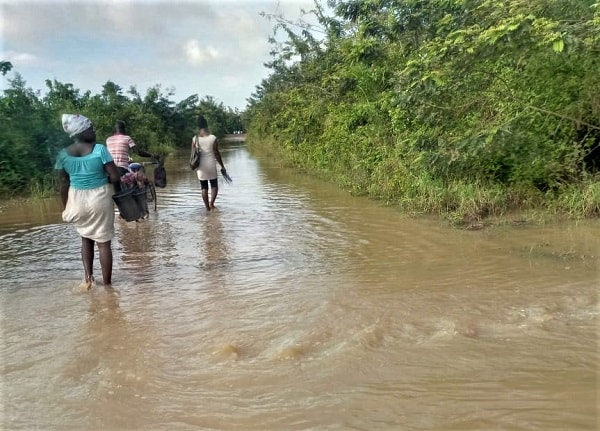 Some commuters appear to defy the flood Follow @Graphicgh

The Surowi River has overflowed its banks following torrential rains, cutting off the Atonkwa and Abeena communities, near Elmina in the Central Region.

Yesterday, vehicles could not move to the two communities, as the flood waters spilled over onto the main road.

Schoolchildren from other villages who attend school in the two towns and their teachers could not attend school.

The Municipal Officer of the National Disaster Management Organisation (NADMO), Mr Patrick Obeng Yeboah, said a situation report would be sent to the NADMO Regional Office for further action.

"We have assessed the situation and will send our report to the regional office tomorrow," he told the Daily Graphic on Monday, October 14.

Mr Yeboah explained that the bridge over the Surowi River was too small and a major contributor to what had become the perennial flooding.

As a result of that, he said, the river overflowed its banks onto the road any time there was a downpour.

He said the situation sometimes worsened when the water spilled over to Atonkwa.

Mr Yeboah noted that while NADMO would want to help stop the recurrence of the flooding, the problem was bigger than the municipal or the regional NADMO or even the municipal assembly.

"The problem of reconstructing the road and expanding the bridge is bigger than NADMO or the assembly. It has to be captured in the national budget,” he said.

Residents expressed worry about the development and called for support to stop the perennial flooding.

Some residents expressed disappointment in the assembly for failing to take action to repair the road.

A resident of Atonkwa, Pastor Henry Kobina Nyewan, said the failure of the authorities to heed the call for the re-engineering of the road was unpardonable.

He said it would be fair for residents to boycott politicians who went to the area with promises of getting the road done but failed to do so.