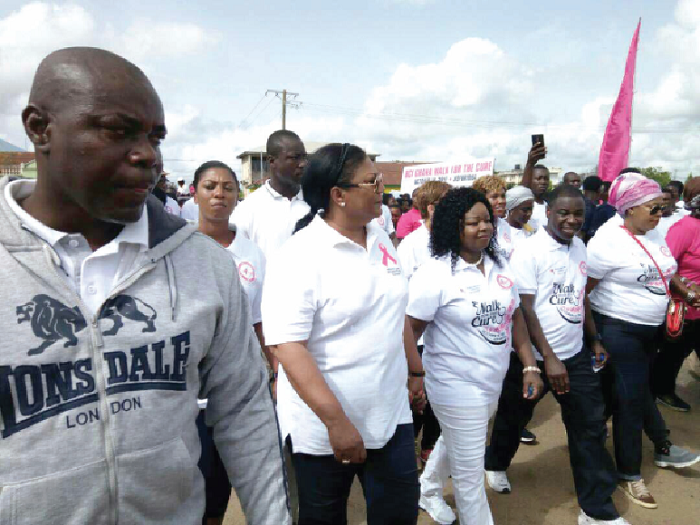 She has, therefore, commended Breast Care International (BCI) for being very instrumental in making breast cancer an urgent national issue and for raising funds to support education, diagnosis and treatment of the disease.

"Today more Ghanaians know about breast cancer and what to do because of organisations such as BCI. I am particularly pleased that institutions such as BCI have for years spearheaded education, awareness and screening campaigns to prompt people into action, address the gap and help save our women.

Ayeeko to BCI for its dedication to the cause of women in Ghana," she said.

Mrs Akufo-Addo was speaking at a durbar after she had participated in this year's breast cancer awareness walk held in Koforidua in the Eastern Region at the weekend.

The walk, which started from the Prisons park, ended at the Jackson Park. It attracted ministers of state, municipal and district chief executives, celebrities, a delegation from the United States, students and people from all walks of life.

In all, an estimated crowd of over 30,000, according to local organisers, took part in the walk which brought the hitherto quiet Koforidua town to a standstill.

According to Mrs Akufo-Addo, it was now common knowledge that breast cancer was the leading cause of cancer deaths among women.

But she said although early detection could lead to cure, some women unfortunately used non-proven methods and reported to hospital late for treatment.

The First Lady said her foundation had pledged to help drive the building of a one-stop cancer centre in the country and hoped that that would make a significant impact on cancer care,especially breast cancer.

She was, however, of the belief that comprehensive care of breast cancer under the National Health Insurance Scheme (NHIS) would make "this even more impactful."

"I am very committed to this cause and I believe every Ghanaian woman deserves access to top quality cancer care in the country," she said.

Mrs Akufo-Addo challenged BCI to increase the number of survivors from the present 800 to 2,000 in the foreseeable future in a bid to boost public confidence in the various treatment options of the disease, pointing out that "breast cancer can be scary but we cannot allow it to beat us. We have it in us to defeat it".

The Eastern Regional Minister, Mr Eric Kwakye Daffour, was of the view that breast cancer was no respecter of persons and, therefore, called for an intended awareness creation.

The Paramount Chief of the New Juaben Traditional Area, Professor Dasebre Oti Boateng, also commended BCI for its awareness creation of the disease.

The Chief Executive Officer of BCI, Dr Beatrice Addai Wiafe, thanked its partners for their continuous roles in bringing education on breast cancer to the doorstep of Ghanaians.