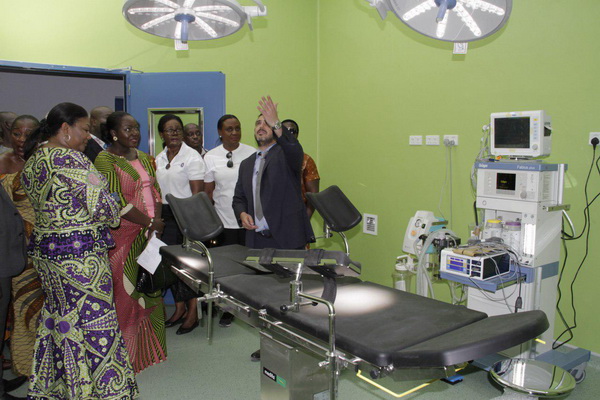 Mr Eric Gene (hand raised), Partner, Africa Building Partners, the contractors for the project, explaining a point to the First Lady, Mrs Akufo-Addo (left), during a tour of one of the theatres at the unit. With them is Lady Julia Osei (2nd left), the wife of the Asantehene. Follow @Graphicgh

“I stand here a fulfilled woman. I stand here a grateful mother,” these were the words of the First Lady, Mrs Rebecca Akufo-Addo, when she inaugurated a Mother and Baby Unit with a Paediatric Intensive Care section at the Komfo Anokye Teaching Hospital on Friday. The facility was put up at a cost of GH¢10million.

“With the construction of the facility which has 130 cots, 15 incubators, 11 paediatric beds, two infant ventilators and nine birthing beds, we have provided a place where mothers and babies can receive care in dignity and accorded the respect due people who give us life,” the First Lady said.

She paid glowing tribute to Mrs Samira Bawumia whom she referred to as “my daughter,” for her contribution in seeing to the success of the project.

The construction of the building was spearheaded by the First Lady through her Rebecca Foundation with the aim of putting an end to congestion at the over 60-year-old already existing Mother and Baby Unit which records about four infant deaths daily, as well as stem the practice of having mothers to queue in turns for surgery.

The building was put up in a record time of five months.

Described as world-class and the first of its kind in Africa, the facility has been certified as ‘green’ by EDGE, a group affiliated to the IFC and the World Bank because of its capability to save over 50 per cent of its energy needs, 35 per cent of its water requirements and savings made on construction costs.

Mrs Akufo-Addo indicated that the construction and furnishing of the facility in record time had taught her some very revealing but encouraging lessons.

The first lesson, she said, was that ‘’together as a people we were capable of solving our problems and meeting our challenges.’’

“The dream of President Nana Addo Dankwa Akufo-Addo of a Ghana Beyond Aid has become my dream also and the dream of many others.”

“We are capable of developing the country given our enormous natural and human resources. We look forward to a day when Ghana sits at the negotiating table as worthy partners and from a position of strength. That is the President’s dream,” she added.

Touching on the second lesson, Mrs Akufo-Addo said gender, tribe, religion, political affiliation, age and economic status did not matter and that a people united with a common purpose for a common good was all that was needed to develop the country and “this is what struck me when people from all walks of like came together to support this project.”

The third lesson was that even though the media were regarded as overly intrusive and judgemental of people, especially those in power, they were a powerful tool that shines light on society and unearths problems for redress.

She noted that the role played by the Multimedia Group was a clear indication that the media constituted an instrument for national development.

She, therefore, charged the media to take on more social issues “that affect our people and shock us into action. Multimedia, Seth Kwame Boateng, you make us all proud,” she said.

Mrs Akufo-Addo said she had been discussing with her team the need for the facility to be properly maintained and asked rhetorically, “Are we going to still be proud and happy of the unit in 10 or even 20 years’ time? Will the children who are born in this facility today come back to have their own babies in a well-functioning, well-maintained facility?”

She expressed her excitement at the concrete steps the authorities at the KATH had taken to ensure that the facility was well maintained and gave an assurance that the Rebecca Foundation would provide the hospital with all the support it could muster.

The First Lady expressed the hope that with the facility now in existence, together with other interventions, the country was on course to attaining the Sustainable Development Goal 3, to engender healthy lives and promote the well-being of people of all ages.

The Mother and Baby Unit, she expressed the hope, would assist to eliminate mother to child HIV transmission and help in achieving maternal and infant mortality targets.

Mrs Akufo-Addo announced that the Rebecca Foundation had initiated what she called ‘Rebecca’s Special Initiative.’ She said the enterprise was constructing a hostel for parents of children receiving cancer treatment at the Korle Bu Teaching Hospital and that its next move was to construct an intensive care unit at the children’s block of the hospital.

She called on Ghanaians to support the initiative just as they did with the execution of the KATH project.

The Minister of Health, Mr Kwaku Agyeman Manu, described the First Lady as a “Domestic Development Partner” and commended her for the enormous support her foundation had offered to the ministry.

The Bantamahene, Baffour Owusu Amankwatia VI, commended the First Lady for her untiring efforts to get the project off the ground and urged the staff and management of the facility to institute a strict maintenance regime to ensure that the facility was kept in good condition at all times.

He urged people who would patronise the facility to be ready to pay a token so that the managers can maintain the machines and other equipment, as well as keep the building in good shape.