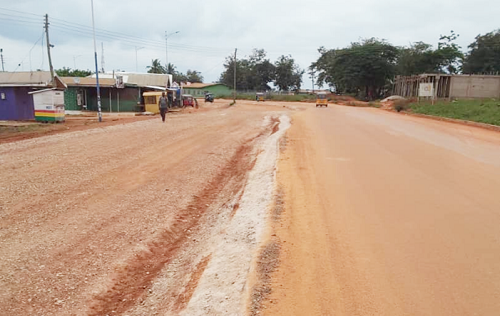 Construction of the first-ever dual carriage road in the Ahafo Region is ongoing at Goaso, the regional capital.

Financed from the government’s internal resources, the project has, however, suffered delays, with residents appealing for expedited action on it.

Covering a distance of about three kilometres, the project spans the entire length of the Hospital Road from the only roundabout in the regional capital to the main road towards Mim, a town known for its timber processing business.

For almost five years now, the contractor has been on and off the site, and currently just about 30 per cent of the work has been completed.

Culverts are still under construction while the previous single lane has been widened.

Mr Peter Nsiah, a public servant who lives just close to the road, said the delay in completing the project was a worry to people who used the road daily.

"Recently, the rains made the road so muddy that it was a sorry sight using it either by foot or on a vehicle, so it is important that the authorities take a serious look at the project," he told the Daily Graphic at Goaso last Tuesday.

Ms Elizabeth Osei, a petty trader, said many people were happy when the project started, becoming disappointed with the delay in its completion.

The Omanhene of Goaso, Nana Kwasi Bosomprah, told the Daily Graphic that he expected the project to trigger a broader development of the area.

He was equally concerned about the poor state of the 41.5-kilometre Mabang-Goaso road, which links the Ashanti Region to the Ahafo Region.

He pleaded with the government to take the project off the Cocoa Roads and put it under the Ghana Highway Authority so that construction would not delay any further .

He said chiefs of towns along the stretch were concerned and would soon present a resolution to the Minister of Roads and Highways.

The Ahafo Regional Minister, Mr George Boakye, told the Daily Graphic via phone that the contractor had been brought back to the site.

He expressed the hope that the slow pace of work would be addressed.