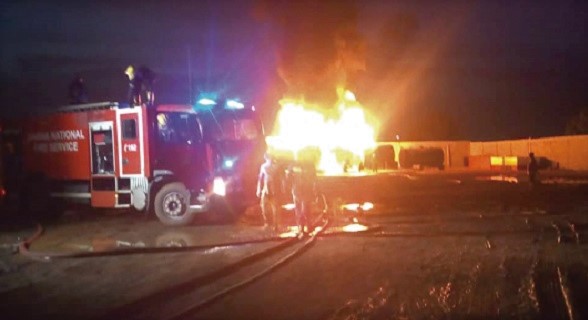 Fire personnel at the scene to put off the inferno
30.5k Shares

Fire has gutted a tank farm at Kpone Kokompe in the Greater Accra Region.

The fire, which started at about 5 p.m. on Tuesday, June 9, this year, destroyed fuel tankers parked in the yard which is close to the premises of the Jesus Christ of Latter Day Saints at Kpone Kokompe.

Four fire engines from various fire stations were dispatched to the scene to control the blaze.

The cause of the fire is yet to be ascertained by authorities.

The Operations officer at the Tema Regional Fire Command, Mr William Abaka Blankson, told journalists that the GNFS received a distress call at about 5 p.m. last Tuesday following which firemen from Devtraco and other fire stations in the Tema Metropolis moved swiftly to contain the fire and prevent it from spreading to other installations around.

He said although investigations were yet to commence to ascertain the cause of the fire, preliminary checks indicate that the fire might have been caused in the course of fuel transfer from one tanker to another.

When the Daily Graphic visited the scene yesterday morning, the entire tank farm had been sealed off, with no human activity in sight.

The Kpone Municipality has come under the radar in recent times due to some unwholesome activities believed to be going on in some of the numerous tank farms located in the area, including illegal fuel adulteration or ‘fuel boxing’ as it is commonly called.

In the month of April last year, 15 bulk road vehicles (BRVs), otherwise known as fuel tankers, that were loaded with petroleum products got burnt when fire engulfed a fuel storage depot at Kpone.

The Chamber of Petroleum Consumers in a report issued on the incident raised concerns about the practice of mixing or adulterating fuel, stressing that the practice was heavily frowned upon and thus called for strict sanctions to be imposed on anyone found to be engaged in the illicit activity.