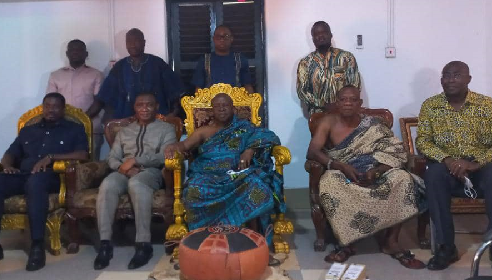 The Omanhene of Sefwi Anwhiaso, Ogyeahoho Yaw Gyebi II, has urged the government to find a strategic investor to take over the 80 per cent shares of the Chinese investor in the Ghana Bauxite Company (GBC) Limited to ensure the livelihood of the workers of the mine.

He said the local economy evolved around the existence of the mine and to ensure that the community survived the exit of the Chinese investors, Bosai Minerals Group.

According to him, every mining company depended on the people around and in the community for its workforce and as such played a very significant role in the local economy.

He, therefore, called on the government and other agencies related to the mine “to come together to find ways of reviving the operations of the mine to ensure that the people have something to do”.

The Omanhene, who is also the President of the National House of Chiefs, made the call yesterday at his palace when the Deputy Minister for Lands and Natural Resources, Mr. George Mireku Ducker and the Western North Regional Minister, Mr. Richard Obeng, paid a courtesy call on him.

The deputy minister was in the region to visit the Ghana Bauxite Mine at Awaso to hold discussions with the workers over the fears of losing their work with the non renewal of the lease of the Bosai Minerals Group from China, the investor.

Ogyeahoho expressed his satisfaction at the government’s decision not to renew the mining lease for the investors as the latter had not been of help to the community.

He said until Ghana Integrated Aluminium Development Corporation (GIADEC) came on board to manage government’s interest, the mine had always declared losses.

According to him, the Chinese investors also collapsed the business of the local haulage sector who were carting the commodity to the ports with the excuse that the commodity was losing its value on the work market and thus paying them less for the haulage.

Ogyeahoho said the investors rather imported larger trucks with as many as 32 wheels to do their own carting.

“They did not only collapse the local industry but also destroyed our road networks and those who were supposed to enforce the law also looked on unconcerned,” he stated.

The Omanhene insisted that the establishment of a bauxite refinery should be part of the requirements for the renewal of the mining lease.

Ogyeahoho Yaw Gyebi also called on the government to be proactive in protecting the interest of the country and not to allow these foreign investors to rip off the country.

He said it was in furtherance of that the sector minister delegated him to come to the ground to acquaint himself with the issues.