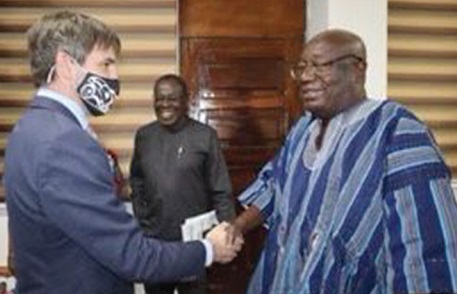 The other countries are Liberia, The Gambia and Togo.

The money will help the beneficiary countries build the capacity of their national climate measurement, reporting and verification (MRV) systems within a four-year period.

The MRV systems are crucial steps for nations to develop strong and effective mitigation policies and actions because they give governments transparent, accurate and comparable information on emission sources.

Mr Guilbeault said the Canadian climate finance project was administered by NovaSphere, a Canadian non-profit organisation which helps countries track emission reduction progress as they work towards achieving their goals under the Paris Agreement.

“Both Canada and Ghana are building a solid partnership with the shared goal of tackling climate change, biodiversity loss and pollution,” he added.

He said the partnership had been cemented by the ongoing co-leadership of the two countries to ratify a new legally binding global agreement on plastic pollution at the UN Environment Assembly (UNEA).

According to Mr Guilbeault, “this trip has strengthened Canada’s partnership with Ghana and deepened our understanding of how best to support developing nations in their climate change mitigation and adaptation efforts”.

In support of the Paris Agreement objectives in 2021, Canada announced the doubling of its international climate finance commitment to $5.3 billion over five years.

During the visit, Mr Guilbeault met with the President of the African Development Bank, Dr Akinwumi A. Adesina, to discuss issues of climate finance and the role of multilateral development banks in that regard.

Also, he held discussions with representatives of UN agencies and the World Bank, which further provided insights into how the multilateral organisations were supporting green economic development in West Africa.

He further deliberated with researchers, the youth, local NGOs and other stakeholders on sustainability matters such as energy transition, biodiversity conservation, adaptation and resilience, smart agriculture and forest conservation.