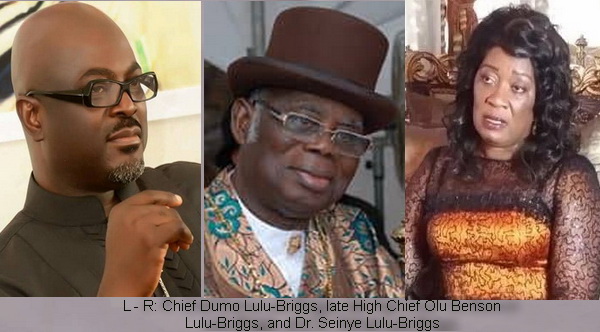 An Accra High Court presided over by Justice Eric Kyei Baffour, Justice of the Court of Appeal (Sitting as additional High Court Judge) on Monday, December 23, 2019 ordered the release of the remains of the late Nigerian philanthropist, High Chief Olu Benson Lulu-Briggs to his “family by custom, led by Chief Dumo Lulu-Briggs, to convey the same to Nigeria, for burial and funeral rites.”

The order follows months of wrangling in court between the widow of the deceased, Seinye Lulu-Briggs, and his three oldest sons - Chief Dumo Lulu-Briggs, Senibo Lulu-Briggs and Sofiri Lulu-Briggs, over who is the rightful person to recover the body of the Late High Chief from the Enterprise Funeral Services Ghana Limited at Lashibi near Tema where it had been deposited since he passed away nearly a year ago.

While the widow claimed that she is the rightful person by virtue of being married under the Nigerian Marriage Act, to take the body of the deceased for burial, the sons made a counter claim based on Kalabari customs and traditions, that they are those clothed with authority to take custody of their late father’s body for burial.

But after hearing arguments of counsel for the widow, Kimathi Kuenyehia, and Nana Agyei Baffour Awuah for the sons, the court noted that it had not been disputed before the court that the family of the late High Chief Lulu-Briggs were a patrilineal family according to the custom of the Kalabari people. Justice Kyei Baffour held that in a patrilineal family membership of the family was determined through a blood relationship with the deceased High Chief and therefore the children of the deceased constitute the family of the deceased. Accordingly, he ordered that the remains be handed over to the family led by the Chief of the family, Chief Dumo Lulu-Briggs.

Click to read a certified copy of the Court's Ruling

The Judge took cognizance of the widow’s claim that she would be subjected to cruel, inhumane or barbaric customary practices of the Kalabari people, if the body was sent to Nigeria for burial. Accordingly, the court ordered that the family of the deceased, led by Chief Dumo Lulu-Briggs, provide an undertaking that they would not allow or suffer the widow to undergo any such cruel, inhumane or barbaric custom.

Graphic Online understands that Chief Dumo Lulu-Briggs complied with the order to provide an undertaking by filing it in court on the same day of the ruling.

Specific Orders of the Court

Justice Eric Kyei Baffour expressed the hope that his orders would bring the wrangling to an end so that the family can bury the deceased whom they all say they loved so dearly.

Graphic Online also understands that the sons intend to convey the body of their late father, High Chief O.B. Lulu-Briggs to Nigeria on 27th December 2019 to lay him to rest.