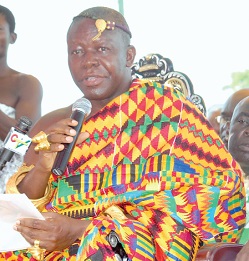 The Asantehene, Otumfuo Osei Tutu II, has stated that traditional leaders should take some of the blame for the activities of illegal miners in their jurisdictions.

He said even though the government did not involve them in granting a lease to the miners, whether legal or illegal, they could not claim they were not aware of the activities of the miners and the effects of their operations on water bodies and farming in their areas.

He said if they claimed not to be complicit in the activities of the illegal miners, “what did you do when you saw the harm being caused to the environment and the destruction to the water bodies?”

Addressing members of the Ashanti Regional House of Chiefs at their first meeting of the year, Otumfuo told the chiefs that when they saw the harm being caused, the least they could have done was to make a report to the police or the Manhyia Palace.

The overlord of Asanteman said the inaction by the chiefs was an indication that they were accomplices and were benefiting from the act.


He warned that if the traditional leaders did not sit up, posperity would not forgive them.

So far, he said, the wrong people involved in the destruction of the environment were being arrested by the security services while the real culprits were walking free.

According to him, those being arrested at the mining sites were not the real culprits but people who were just trying to earn a living by offering their skills and labour.

He asked if those arrested soaked in the mud had the wherewithal to acquire concessions and buy excavators to engage in such activity.

He said those the government and the security agencies should be after were the financiers who employed those labourers and not the workers.

Commenting on a presentation by the Stool Lands Administrator, Maame Ama Edumadze-Acquah, on the distribution of the revenue from ground rents, the Asantehene proposed that a tripartite committee made up of representatives of traditional leaders, district chief executives and the Office of the Stool Land Administration be formed to agree on the projects that the share of the district assemblies should be used for.

According to the chiefs, although the lion’s share of the revenue was given to the district assemblies, the assemblies had very little to show for it.

The chiefs said even though the revenue was from the land that they held in trust for the people, the assemblies did not account to them what they used the money for.

In her presentation, Maame Edumadze-Acquah explained that 10 per cent of the revenue collected from ground rent was used for administrative purposes while 55 per cent of the 90 per cent was given to the district assemblies for developmental projects.

The rest, she explained, was shared between the traditional councils and the chiefs.

She admitted that the district assemblies used some of the revenue for recurrent expenditure but said most of them used it for developmental projects.

The challenge, she however explained, was the fact that the district assemblies did not mark the projects to be funded from the Stool Lands Revenue.

Going forward, she said the assemblies would be encouraged to clearly mark the projects as funded from their share of the Stool Land Revenue to enable the citizens to know what their money was used for.