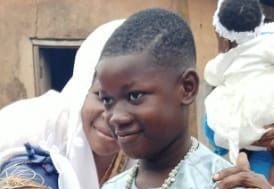 A fetish priestess has been arrested in connection with the killing of the 10-year-old boy at Kasoa in the Central Region.

She was arrested at Amanase near Suhum in the Eastern Region by a team of police officers, Graphic Online has gathered.

She is to assist with investigations into the alleged ritual murder of the 10year old boy at Kasoa.

Graphic Online's Emmanuel Bonney reports that the two teenagers who allegedly killed a 10-year-old boy at Coca Cola, near Lamptey, a suburb of Kasoa in the Central Region, had initially planned to kidnap him to demand a ransom of GH¢5,000, according to the prosecutor.

Putting the two teenagers before the Ofaakor District Magistrate Court Tuesday in their first appearance in court, the Prosecutor, Chief Inspector Ernest Agbo, said the accused - Felix Nyarko, aka Yaw Anane, 16, a mason labourer, who is the first accused, and Nicholas Kini Kwame, 18, a student and second accused, had planned to take the money and add Ishmael Mensah Abdallah, the deceased, to it to present to a spiritualist for rituals.