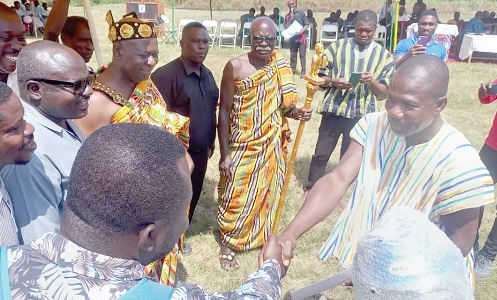 Ebenezer Papa Hottor (right), the Overall Best Farmer for the district, receiving his prize at the function
30.5k Shares

Seven farmers from the Fanteakwa North District in the Eastern Region were honoured at the 38th edition of Farmers Day held at Addokrom on the theme: “Accelerating Agricultural Development through value addition”.

The Fanteakwa North District Chief Executive (DCE), Charles Oware-Tweneboah, in his message at the event, congratulated both farmers and fisherfolks in the district on their immense contributions in feeding the people in the district and beyond and more importantly, their contributions towards Ghana’s economic growth.

He said in the Fanteakwa North District’s quest to promote value addition, Women in Agriculture, a unit in the agriculture department, trained women groups at Agyaman in fortifying gari with coconut, sweet potato and soya.

The same women groups were also taken through branding, packaging and labelling the products which were exhibited in the 2021/ 2022 commodity satellite market in Koforidua recently.

He said with the current Planting for Food and Jobs programme, the district had supplied 2,593 bags of NPK fertiliser to 218 farmers this year, which enhanced their farming activities.

He said within the year, 643 hectares of maize farms were infested by army worms. However, the assembly through the District Agricultural Department supplied chemicals to 915 farmers, which was used in spraying the farms.

Mr Oware-Tweneboah said though the district had a lot to be proud of, there were some challenges including high infection rate of HIV/AIDS virus in the district, which would not help in higher production of agricultural products.

The District Director of Agriculture, Solomon Anani Attipoe, lauded the farmers in the district and his staff for the hard work and dedication towards the promotion of agriculture development in the district.

He was particularly grateful to his staff for impacting new technology in the agricultural sector to the farmers, which helped them experience higher productivity in the year.

The Overall Best Farmer, Mr Hottor, told the Daily Graphic that the training and advice he had from the agriculture extension officers in the district contributed to his excelling in food production in the district.

He, therefore, entreated all farmers to ensure that they took training organised by the district agriculture department serious, so as to ensure they did what was expected of them to continue to attain value addition.