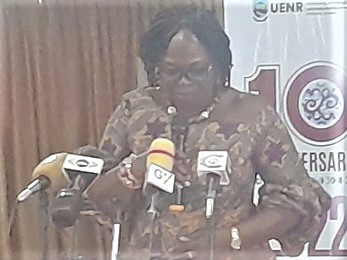 The Chairperson of the Commission, Barbara Oteng-Gyasi said the move was to prevent small-scale miners from relying on foreigners to undertake their activities.

Mrs Oteng-Gyasi added that the establishment of community mining entities had also been done to ensure that proper methods of mining were used in the communities to save the environment and water bodies.

The dialogue, organised by the University of Energy and Natural Resources (UENR), Sunyani was held on the theme: Enhancing Multi-Stakeholder Approaches Towards Addressing Challenges with Artisanal and Small-Scale Mining, and the Institutional Dynamics for Sustainable Practices in Ghana.

It brought together participants including regulatory agencies, artisanal small-scale mining practitioners, large-scale companies, academia, policymakers, and chiefs among others.

Mrs Oteng-Gyasi explained that a number of machines had been imported to ensure efficient processing by small-scale gold mining operators.

"We are engaging the commercial banks to provide funding to small-scale gold mining operators as a measure to do away with the support from foreigners", Mrs Oteng-Gyasi explained.

Mrs Oteng-Gyasi said the illegal miners were mining haphazardly because they did not know the exact spots where they could find gold. “So they begin from a place and when they do not find gold, they move to another place,” she said.

She said to forestall that practice, the commission had liaised with the Geological Survey Department to undertake geological investigations to determine places where gold could be found and legalise those places to the small-scale gold miners.

"So we believe that when we are successful in this direction, we are going to significantly reduce illegal mining in the country,” Mrs Oteng-Gyasi stated.

"As a commission, we are committed to pursuing responsible small-scale mining because we recognise that the country generates resources from that sector and it also provides a lot of employment for our youth," he said.

Various speakers at the dialogue expressed worry that the impact of past approaches to illegal mining had remained disappointing.

That, according to them was because artisanal and small-scale gold miners had continued to operated illegally and brought about the destruction of the environment and loss of revenue to the state.

Contributing to the discussions, the Chairman of the Governing Council of UENR, Professor Kwasi Nsiah-Gyabaah, said it was unfortunate that both the NDC and NPP had not been able to implement the harsh but necessary measures needed to address the challenges for fear of losing votes.

He stated, however, that despite the widespread negative perception about mining, with appropriate technology, education and training it could result in minimal environmental degradation and improved profitability.

Prof. Nsiah-Gyabaah, therefore, called for a new entrepreneurial, science and technology approach to address the challenges in the artisanal small-scale gold mining sector.

The question on the lips of many contributors after watching a documentary on the extent of degradation of the environment through illegal gold mining was; "Who is responsible for this".

The documentary showed how cocoa plantations which serves as the mainstay of Ghana’s economy were being destroyed in parts of the country by illegal gold miners.

It also depicted how sources of rivers had been blocked by these illegal miners who were mining right in the middle of rivers.

Answering the question, the President of the Subin Divisional Council of the Bono Regional House of Chiefs, Nana Kwaku Bediako, put the blame at the doorsteps of politicians and officialdom.

"As for chiefs and ordinary Ghanaians, we don't have money to purchase excavators to engage in illegal gold mining," he stated.

However, before the applause Nana Bediako drew from the participants could die down, the Bono Regional Minister, Ms Justina Owusu-Banahene, had provided a different opinion.

"Nana it is true that chiefs do not have money to buy excavators to engage in illegal gold mining, but some chiefs are complacent in the sale of lands to these illegal miners," she stated.

Ms Owusu-Banahene, who represented the Vice-President, Dr Mahamudu Bawumia, was confident that the impact of the dialogue would be enormous, considering the interest of academia and non-political actors in the discourse.

For his part, the Vice-Chancellor of UENR, Professor Elvis Asare-Bediako, said it was important for policymakers to take into consideration existing and planned future interventions to ensure proper harnessing of Ghana's natural resources.

He encouraged the government and small-scale mining operators to continue to dialogue constructively on the best way to ensure the use of appropriate mining methods.

"On the part of the government, policies need to be drawn and clear guidelines given as to the most appropriate way small-scale mining could be carried out, focusing on the preservation of the environment, water bodies, natural reserves and health issues," Prof Asare-Bediako said.