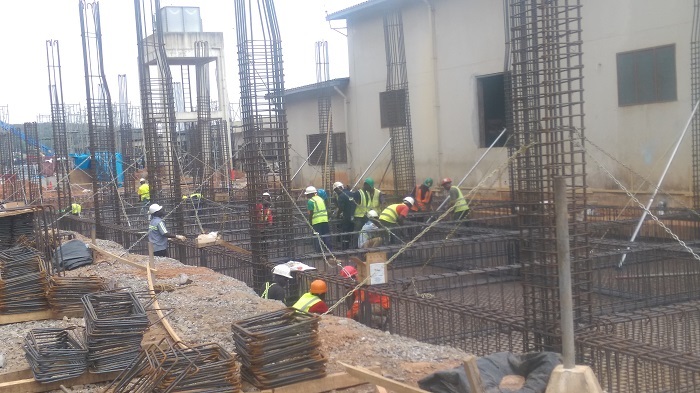 Work on the expansion of the Albert Bosomtwe-Sam Fishing Harbour at Sekondi in the Western Region is progressing steadily.

So far, 40 per cent of the work has been completed, with the remaining portion scheduled to be done in the next 11 months.

During a visit to the site by a delegation from the Japanase government, which gave out the grant for the project,  the delegation was told that major ground foundations had been laid by Ecoh Corporation, a Japanese firm contracted to undertake the project.

The tour of the site was led by officials from Japanese International Cooperation Agency (JICA).

At some sites of the harbour, metal pillars had been mounted to enable the main construction to begin this February.

When completed, the harbour will create more landing space and open up the fishing harbour to contain 126 inshore vessels and canoes.

Currently, the fishing harbour, which is estimated to be accessed daily by more than 10,000 fisherfolks in Shama, Sekondi-Takoradi and its adjoining fishing communities, can only contain 50 fishing vessels.

Explaining the major component of the project to journalists, a senior civil engineer of Ecoh Corporation, Mr Hitoshi Takemoto, said the expansion work would include the construction of a berthing space, breakwaters, a drive way to cart and push trucks and an additional ice plant.

The construction of a berthing space will pave way for mooring more vessels and allow safe and secure mooring that can facilitate the unloading or loading of cargo or people from vessels.

The other remaining components will all ensure that the Sekondi fishing harbour become a bigger place to undertake more fishing activities.

Since the first phase was completed 15 years ago, there has been a massive increase in the population of fishermen and women who conduct businesses at the harbour.

“One of the reasons for the congestion is that many fishing nets are accumulated on the wharf apron and existing fishing handling place in spite of the narrow area in the harbour,” Mr Takemoto said.

Furthermore, he said, the ice making capacity in the harbour could not cater for the increase in ice demand because of the increase of the landing volume, adding that “fishermen are compelled to use low quality ice transported from neighbouring areas”.

The Director of Takoradi Harbour, Captain Ebenezer Kojo Afadzi, said measures were being put in place to ensure that the facilities being constructed at the Sekondi fishing harbour were properly maintained.

He said his outfit would not permit  any person or group to undertake any unauthorised activity that would destroy the facilities being constructed.

Over the past years, Captain Afadzi said, measures had been implemented to ensure that the Sekondi fishing harbour was not endangered.

Giving his impression about the level of work undertaken at the harbour, a representative of JICA, Mr Tomonari Takeuchi, said the government of Japan was impressed with the nature of the harbour after it funded the first phase of construction 15 years ago.

That, he said, was one of the major reasons why an additional US$ 20 million was allocated for the second phase to begin.

Mr Takeuchi said JICA had, over the past years, undertaken many projects in Ghana as part of the relationship between the two countries.