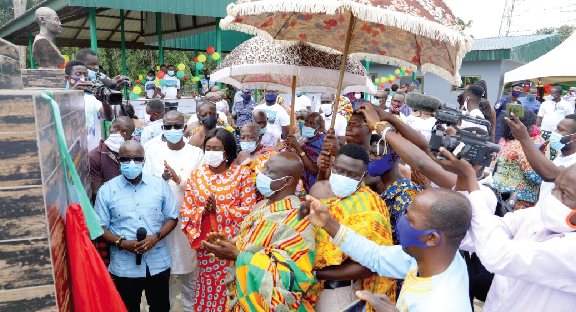 The Ministry of Tourism, Culture and Creative Arts has inaugurated the newly expanded Odweanoma Paragliding Field at Atibie in the Eastern Region to accommodate more tourists.

The ministry has also unveiled busts of the late former Minister of Tourism, Mr Jake Obetsebi-Lamptey, and his late personal assistant, Ferdinand Ayim, who birthed the paragliding site on the Kwahu Ridge in the early 2000s to honour their memories.

The Odweanoma field and its paragliding festival — now synonymous with the Kwahu Easter festivities — received a facelift in the expansion of the flight area to take five paragliding planes simultaneously; the construction of a new entrance area; paving of the entire event area and the construction of an enclosed VIP catering space and new washrooms, among others.

The expansion project was part of efforts by the Ghana Tourism Authority (GTA) to promote the centre to both domestic and international tourists and make it an all-year-round tourism destination.

The Minister of Tourism, Culture and Creative Arts, Mrs Barbara Oteng-Gyasi, told the Daily Graphic in an interview after last Monday’s inauguration that the ministry, through a collaboration with the Ghana Air Force, had begun training some local pilots to use more of them for the paragliding services.

She said the ministry was considering establishing a paragliding school at Kwahu to train more pilots.

Mrs Oteng-Gyasi expressed regret about the impact of COVID-19 on tourism, saying many international tourists had cancelled their journeys and reservations.

She said plans initiated by the ministry to improve domestic tourism rather than rely extensively on international tourists had been informed by lessons from the pandemic.

She said that was necessary to make the industry-relevant during uncertain times such as seen with the pandemic.

Mrs Oteng-Gyasi called on Ghanaians to support the ministry’s 10-year "Beyond the Return" programme to attract investment opportunities from both local and international sources.

Roads leading to the Odweanoma Paragliding Field, however, had muddy surfaces, the Daily Graphic observed.

The Chief Executive Officer of the GTA, Mr Akwasi Agyeman, said the current state of the road was, however, an improvement upon what existed a year before.

"The road is in a bad state, but you can see that work is ongoing. We see the gutters being done,” he stated, and appealed to the contractor to work at a faster pace.

"It is believed that when we take advantage of our natural beauty, cultural heritage, hospitality, safe environment and security as a resource, we can easily develop our tourism potential as sources for creating jobs and alleviating poverty, especially in the rural communities where most of the tourist sites are hidden," he said.