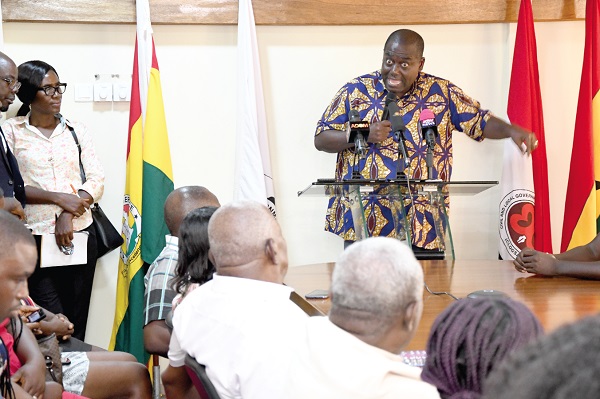 Two labour groups have joined the calls against the decision of the government to include Pension Funds in a proposed domestic debt exchange programme.

The Civil and Local Government Staff Association, Ghana (CLOGSAG), and the Industrial and Commercial Workers Union (ICU) Ghana, both said that it was against the law for the government to touch pension funds.

While CLOGSAG served notice that members would embark on an industrial action should the government fail to heed its call, the ICU also said it would be compelled to join other labour unions to demonstrate against any such measures by the government.

The Executive Secretary of CLOGSAG, Isaac Bampoe Addo, said at a media briefing in Accra yesterday that section 102 of the National Pensions Act, 2008 (Act 766), restricted the government from using pension funds for any debt exchange programme.

It was in response to a statement made by the Minister of Finance, Ken Ofori-Atta, on the domestic debt exchange programme.

According to him, individual contributions and earnings in the Pension Fund were vested in the individual and not the trustee.

“We state categorically that Pension Funds are individual investments. Per the pronouncement by the Minister of Finance, pension funds for individual holders are exempted from debt exchange programmes” he added.

“CLOGSAG is serving notice on the National Labour Commission (NLC) that should the government default in honouring any of the coupons when due for the schemes, it would declare an indefinite nationwide strike,” Mr Addo said.

In a statement, the ICU also said it was “vehemently opposed to the government’s intention as outlined in the 2023 budget statement to appropriate interests of workers’ pension funds as part of measures to revive the economy and, therefore, outrightly rejects it”.

In a statement signed by the General Secretary of the union, Morgan Ayawine, it said the future of financial security of workers and for that matter pensioners, was sacrosanct and as such must not be violated under any circumstances.

It further said that when allowed to be implemented, the policy would worsen the fate of retired workers who had paid their dues to the nation and deserved a decent and comfortable pension.

“We, therefore, call on the government to rescind its decision and never think of using the pension funds in the domestic debt exchange programme or else they would act in line with other labour unions to protect the security and welfare of workers, especially pensioners,” the General Secretary, Morgan Ayawine said.

Already, the Trades Union Congress (TUC) had said that members would not participate in the debt exchange programme.

At a press conference in Accra, the Secretary General of the TUC, Dr Yaw Baah, said: “The TUC and all our affiliates have decided that the pension funds of our members will not be part of the debt exchange programme.”

“Within one week, the government should ensure that all pension funds, including SSNIT funds, were exempted and if the government refuses to accede to our demand, we will advise ourselves.

“Workers will no longer bear the consequences of any IMF-inspired or IMF-sponsored policies and programmes,” Dr Baah said.