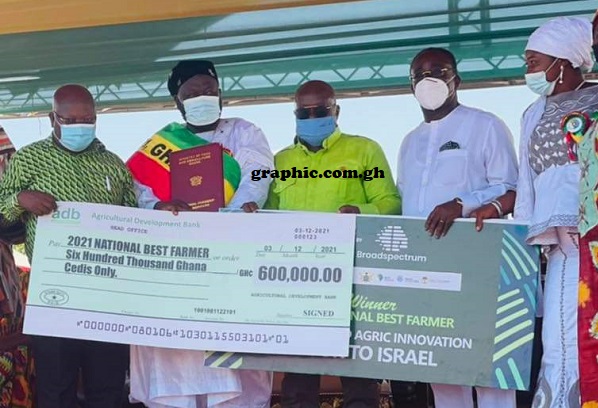 From the display of smocks and beautiful Kente clothes to immaculately rehearsed and gracefully executed Asafo dances and cultural displays by the Centre for National Culture dance troupe, the celebration was a unique one.

The proud winner walked home with a cash prize of GH¢600,000 sponsored by Agricultural Development Bank and a GH¢500,000 insurance cover from GLICO Life.

Wearing a three-piece Agbada and a cap, Alhaji Mashud, accompanied by his wife and well-wishers, walked with smiles to the rostrum to receive his prize from President Nana Addo Dankwa Akufo-Addo. “Farmers need all the support to produce more to feed the nation and reduce food importation”, he said, after receiving the prize.

The first Runner-up, Suleman Yidana, from the North East Region, received a tractor trailer, GH¢200,000 insurance cover, a study trip to Israel, a sprayer and a disc plough.

For the first time in the history of the award scheme, the best fisher received a two-bedroom house to be built at a location of his choice.

In all, 165 farmers and fishermen from across the country received national honours.

Chiefs from the Central Region and other parts of the country graced the ceremony which was beautiful and unique in all aspects.

Among them was the President of the Central Regional House of Chiefs, Odeefuo Amoakwa Buadu, who chaired the function, and the Paramount Chief of the Breman Essiam Traditional Area, Odeefuo Afrankwa III, who is also a member of the Council of State.

Representatives from the Parliamentary Select Committee on Food and Agriculture, the clergy, corporate entities and educational institutions were also present. Personnel from the security agencies were fully deployed in and around the venue to ensure peace and security.

This year's celebration was on the theme: "Planting for Food and Jobs - Consolidating Food Systems in Ghana.”

As early as 7a.m. hundreds of people from across the region had thronged the Adisadel College Park to be part of the celebration.

The park which has been host to the Agricultural Fair and the various Regional Focus days from Monday, November 29, saw a much higher patronage yesterday.

The best farmer said it was important that the government worked to accelerate efforts at mechanising agriculture to make the sector more attractive for the youth.

For his part, Mr Ehun called for stringent efforts at stopping all forms of illegalities in the fisheries sector to sustain the industry.

The National Best Farmer, who is from the Mion District in the Northern Region, is a father of four.