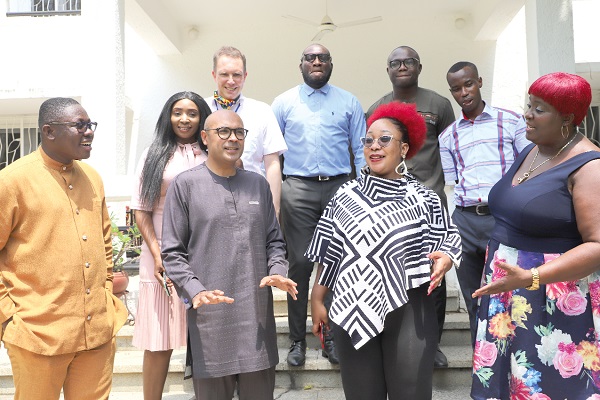 Mr Irchad Razaaly (2nd left), the European Union Ambassador to Ghana, in an interaction with some journalists after the meeting. Picture: EDNA SALVO-KOTEY Follow @Graphicgh

The European Union (EU) will provide €203 million for Ghana as part of its new programming priorities for the period 2021 to 2024.

The funding will be used for three priority programmes, namely, Green growth and jobs, smart and sustainable cities and good governance and security.

The Ambassador of the EU Delegation to Ghana, Mr Irchad Razaaly, who announced this during an interaction with selected media in Accra yesterday, said the priority programmes formed part of the Multi-annual Indicative Programme (MIP) adopted by the EU for Ghana and outlined in a joint programming document for 2021-2027.

He said the programme was developed with Team Europe partners, namely, EU member states, including the Czech Republic, Denmark, France, Germany, Hungary, The Netherlands and Spain, as well as Switzerland and the European Investment Bank.

Mr Razaaly explained that the document had also been drafted in close consultation with the Ghanaian authorities, civil society organisations and other national stakeholders.

For the 2021-2024 period, he said, the EU would build on the initiatives and also strengthen its political alliance with Ghana on security issues in the context of Ghana's seat at the UN Security Council and President Akufo-Addo's Chairmanship of ECOWAS.

The Head of the EU Delegation said the European bloc would support Ghana assert its strategic priorities and positive agenda in regional security.

Ambassador Razaaly said the EU had committed to supporting Ghana to prevent and mitigate the risk of conflict by strengthening its preparedness and resilience to insecurity, saying that had rarely been more relevant than now, within the context of increasing instability and a series of military coups in neighbouring countries.

To achieve that, he said, several projects were ongoing, including the €5.9-million project on strengthening border security and a number of other counter-terrorism programmes, particularly in Ghana's northern regions.

“Moreover, the EU is also supporting Ghana on a different front, namely, maritime security and the fight against piracy,” he added.

Mr Razaaly said to date, Team Europe had shared over €380 million worth of COVID-19 vaccine doses globally, out of which 145 million doses came to African countries.

The number of vaccines to Africa was expected to triple to 450 million by the middle of the year, he added.

The Ambassador said the EU was also committed to building vaccine production capacity in Africa, and that to that end, the EU and its member states were engaged in a €1-billion Team Europe initiative aimed at strengthening “manufacturing and access to vaccines, medicines and health technologies in Africa”.

Additionally, he said, as part of the EU Global Gateway Strategy, Team Europe would mobilise another €300 billion of investments globally in health, among other areas.

Mr Razaaly said the initiative formed part of a 10-year road map developed by the Ghanaian government to make Ghana a vaccine-manufacturing hub in West Africa.

“As a first step, the EU will facilitate the upgrade and strengthening of Ghana’s Food and Drugs Authority and contribute to the production of its first batch of COVID-19 vaccines by early 2024,” he said.

He indicated that the initiative would also enable Ghana to manufacture other vaccines, including protein immune booster (mRNA) vaccines against malaria and tuberculosis, as well as more traditional paediatric vaccines.

As part of the 2021-2024 programming, he said, the EU would invest in the development of smart and resilient cities.

“High population and infrastructure density make cities ideal locations for digital transformation, greater efficiency and productivity, and this could, in turn, lead to economic growth and inclusiveness, while at the same time contributing to climate change mitigation and resilience,” he said.

For that reason, he said, the EU decided to cooperate with Ghana on that topic, supporting the country on its path towards a more digitalised and sustainable future.