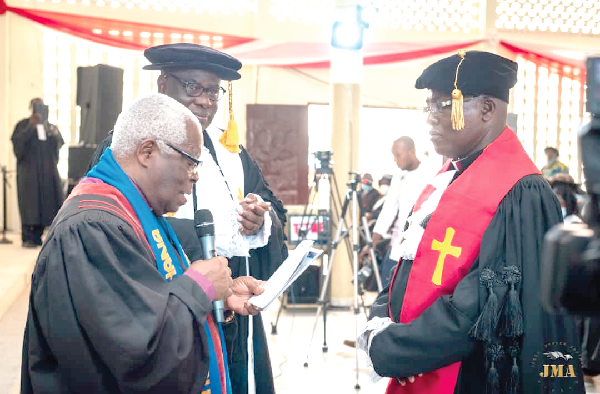 He was elected at the ninth General Assembly of the church and inducted into office at a ceremony at the EP Church in Ho last Sunday.

Rev. Agbeko, who becomes the 14th Moderator of the church, will serve a six-year term.

The induction service was attended by the immediate past Volta Regional Minister, Dr Archibald Yao Letsa; some senior military officers, traditional leaders, among others.

Also present were both the nuclear and the extended families of the new Moderator.

Rev. Agbeko stressed the need for the church to think outside the box by re-strategising and repositioning itself for growth.

“Six years from today, this administration would like to hand over a church that is disciplined, transparent, free from debt, prosperous and financially buoyant; a restored church made up of glorified, unified and rejoicing people enjoying God’s favour and blessings. This is our desired legacy.

"The present generation has the responsibility of delivering the EP Church’s mission of bringing light to where there is darkness. Therefore, all must support the new Moderator to deliver," he said.

Rev. Agbeko said for the church to fit into a new level of "post-modern ministry”, there was the need to carry out reforms.

He mentioned the promotion of spirituality and national evangelism, discipline and moral development, as well as ensuring financial liberation by investing in viable economic opportunities, as part of his vision for the church.

The moderator said he would also pursue training and capacity building of members of the church and develop a detailed database for easy management.

He urged Christians to uphold the values of love, spirituality, discipline and faithful stewardship premised on transparency, prudence and accountability.

Rev. Agbeko thanked the government for its support to the health and educational sectors of the church over the years, saying: “It is my prayer that such government support will continue unabated to include other sectors, such as agriculture."

He also expressed appreciation to chiefs and the church for the support and love extended to him throughout his journey and called on them to extend the same gesture of love by rallying behind him to ensure unity in the church.

Dr Letsa, for his part, said the government would continue to support the church for the accelerated development of the country.

Rev. Agbeko hails from Adaklu Ahunda in the Volta Region and is married with four children.

The 57-year-old Minister of God began his relationship with the church in 1983 and served at various levels until his appointment as the Deputy Director of Religious Affairs of the Ghana Armed Forces.

Until his election at the General Assembly last August, he was the District Pastor of the Accra Newtown branch of the EP Church.

Rev. Agbeko also availed himself to serve the church abroad.

He is a product of the University of Ghana and the Erskine Theological Seminary in Due West, South Carolina, USA, where he earned a doctorate degree in Ministry.