Environment Ministry to include traditional rulers on Densu committee 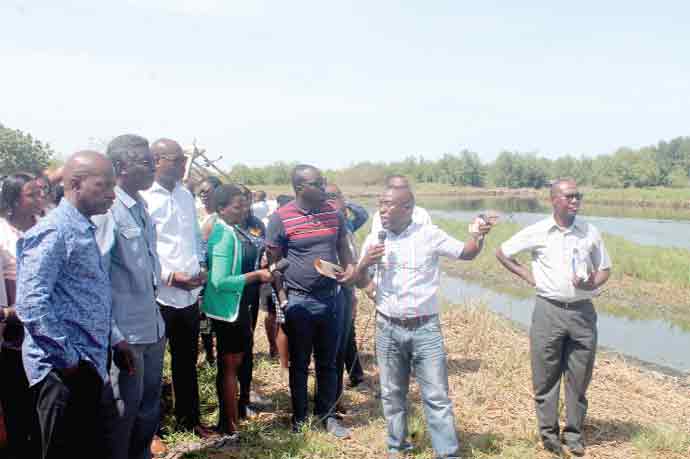 The Ministry of Environment, Science, Technology and Innovation (MESTI) is to set up a committee to work on the protection of ramsar sites in the country.

The sector Minister, Professor Kwabena Frimpong-Boateng, who disclosed this, said the committee would work with traditional leaders and other stakeholders to save the sites from destructive human activities.

Prof. Frimpong Boateng made the disclosure when he led a delegation from the Environmental Protection Agency (EPA), the Forestry Commission and the Water Research Institute on a tour of the Densu Delta Ramsar site last Tuesday, May 22, as part of activities to commemorate this year’s International Day for Biological Diversity.

Due to urbanisation and human activities such as trespassing, sand winning and dumping of waste in the Densu and the Lafa rivers, nearby wetlands known as the Densu Delta Ramsar site have suffered massive degradation.

The delegation toured the Panbros Salt Industry Limited (PSIL) and observed how houses, including church buildings have sprung up in the wetlands

The delegation were also shown a sea defence project which was begun by the company to control tidal waves affecting communities close to the sea but had now been taken over by the government.

Speaking ahead of the tour, the Managing Director of PSIL, Mr Micheal Odartey Wellington, said the company recognised the importance of wetlands as habitat for wildlife and the maintenance of the water table, flood mitigation and water purification.

The company, he said, was committed to efforts to save wetlands.

He mentioned Glefe and Wiaboman as two main communities where human activities were endangering wetlands.

Speaking to journalists after the tour, Prof. Frimpong-Boateng said the committee would ensure that wetlands were conserved and sustained for the benefit of present and future generations.

“We must preserve or natural resources. We need nature and not the other way round. When we mismanage our environment we will suffer the consequences,” he said.

He urged stakeholders in regard of the environment to come on board and help address the issue, since resources in wetlands were of socio-economic importance.

“Global estimates indicate that 64 per cent of wetlands have been lost in the last century. We have no figures or data in Ghana for wetland loss or degradation but a cursory look around tell it all. Most wetlands in Ghana have already been destroyed in the past few years from uncontrolled human activities,” he said.

Later in an interview with the Daily Graphic, the National Wetlands Coordinator, Mr Charles Amankwah, who doubles as the General Services Manager of the Wildlife Division of the Forestry Commission, said the Densu Delta Wetland was home to migratory water birds from Europe, fishes and crabs, as well as other species of animals.

Sixty species of water birds, with an estimated population of 35,000, including eight globally important species, are found in the wetlands.

Ghana is a signatory to the Ramsar Convention on Wetlands and has six designated Ramsar sites of which five are along the coast.

The sixth wetland, which is inland, is the Owabi in the Ashanti Region.

The United Nations has designated May 22, each year as International Day for Biological Diversity to increase awareness of biodiversity issues. This year’s celebration was on the theme: “Celebrating 25 years of action for biodiversity”.