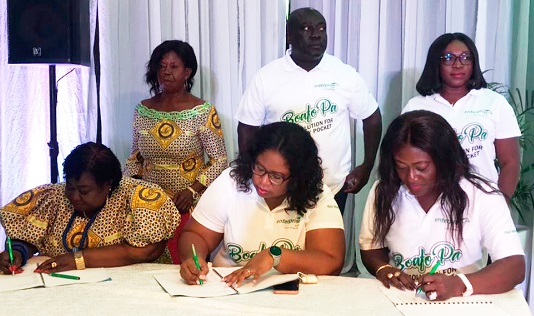 The insurance package covers life, general and health, while the pension package seeks to cushion the beneficiaries with income during their retirement.

Speaking at the launch in Accra, the President of NABH, Joyce Lamptey, stressed the importance of members of the association and artisans signing on to insurance schemes.

She said there was the need for artisans to save towards their retirement in order not to suffer in their old age.

“According to the Chief Executive Officer of the National Pensions Regulatory Authority (NPRA), only a percentage of the working population in the informal sector was on pensions.

“This situation is not the best as the informal sector constitutes majority of the workforce,” Ms Lamptey said.

The President of NABH said the association had about 60,000 members and, therefore, urged the members to sign onto the scheme.

The General Manager for Distribution at Enterprise Insurance, Francis Akoto-Yirenkyi, underscored the need for people to make plans through insurance for themselves and their families.

“Nothing is more important than knowing all the hard work we put into our occupation is protected and safeguarded in times of trouble,” he added.

Apart from the insurance and pension schemes for NABH, Mr Yirenkyi said there was also the ‘susu’ scheme called ‘Boafo Pa’ which provided convenient savings tailored not only to members of NABH but the general public to plan their future and contribute through the innovative technology of the mobile phone.

She said most people were ignorant of insurance and, therefore, the need to increase education about its importance.

“We are also going to serve as their advocate to direct them as to how to go about things and to administer the policy,” Ms Acquah said.

She explained that the insurance scheme was divided into two with 50 per cent as pension and the other half which could be withdrawn after three years of savings.