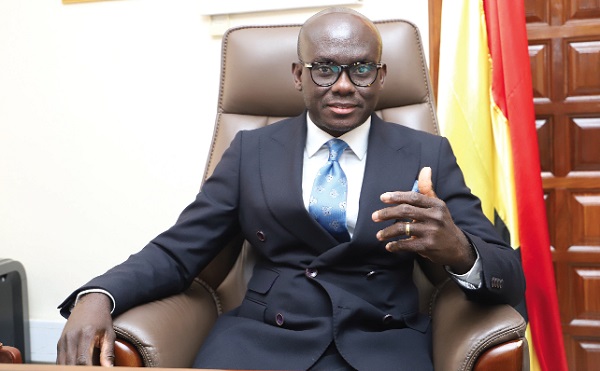 The Attorney-General (A-G) and Minister of Justice, Godfred Yeboah Dame, has called for extensive engagement and cooperation from all stakeholders to make the Domestic Debt Exchange Programme (DDEP) a success.

In an exclusive interview with the Daily Graphic, the A-G said the nation had reached a critical juncture and it required all to come on board to support the common cause of repositioning the country for a turnaround and growth.

Mr Dame lauded the Ministry of Finance for stepping up its engagement with the bondholders and relevant stakeholders, a situation he described as key to debunk false assertions and increase confidence in the debt exchange programme.

“I think the most effective way is to ensure the cooperation of the bondholders and I am very gratified to know that the Ministry of Finance is engaging the bondholders.

“Even before my opinion was sought, various steps were taken to engage some institutions and stakeholders. The Ministry since then has been extending the deadline to ensure more engagements,” he said.

“I would urge all to cooperate in the best way possible because the circumstances we find ourselves in clearly were forced on us by external shocks. We are not the only country in this situation and I am not reiterating anything absurd. I was in the UK when the then Prime Minister, Liz Truss, cited COVID-19 and the Russian-Ukrainian war as significant factors in the skyrocketing cost of living and hardship affecting the UK,” he said.

“I think it is circumstances beyond our control and the whole nation must cooperate to help the government deal with this issue,” Mr Dame added.

The A-G was commenting on his legal advice of November 18, last year on why the government must opt for voluntary acceptance of the DDEP by bondholders through cooperation and engagement as the best option.

According to him, a unilateral variation of the terms of the bonds by the government or the enactment of a law to alter the terms would not be ideal, as that would constitute a breach of contract, hence unlawful, including a violation of the 1992 Constitution.

Ghana is reeling under severe economic conditions, with inflation at 54.1 per cent and the public debt at GH¢467.4 billion, representing 75.9 per cent of Gross Domestic Product (GDP).

The country’s creditworthiness has been slashed to near junk status by all the international rating agencies, a situation which has made it practically difficult for it to access finance on the international financial market.

The government is currently negotiating for a $3 billion support from the International Monetary Fund (IMF), and as part of measures, it has introduced a debt-restructuring programme or the DDEP to enable it to bring the country’s debts to sustainable levels, about 55 per cent of GDP in the medium term.

The DDEP has, however, faced stiff opposition from many entities that hold government bonds, including individual bondholders and corporate institutions such as banks, especially rural and community banks.

The government has since December 31 last year revised the programme to exclude pension funds following threats by organised labour to embark on industrial actions and also modified the design and extended the deadline for voluntary onboarding three times.

The Ministry of Finance has, however, stepped up its engagement with various stakeholders on the DDEP, the recent one being with individual bondholders under the Individual Bondholders Forum (IBF) last Friday.

At that meeting, the Ministry of Finance and leadership of the IBF agreed to form a technical committee to review a request by the former for individual bondholders to be exempted from the DDEP.

Explaining the basis for his legal opinion on the DDEP, the A-G said the bonds were contracts between the government and the bondholders and, therefore, any variation of their terms by a party without the consent of the other party would constitute a breach of contract.

Again, Mr Dame said the Fiscal Responsibility Act, 2018 (Act 982) allowed the Minister of Finance to take measures to ensure fiscal discipline, but such measures per the law did not include a variation, alteration or re-structuring of bonds.

In addition, the A-G said although Parliament could pass legislation or amend existing laws to force the bondholders to accept the variation of the bonds, such a situation would be a violation of the 1992 Constitution.

According to him, since the bond agreements were already in existence, any passage of new legislation by Parliament would affect the bondholders retrospectively, which was a violation of Article 107 of the 1992 Constitution.

“In this situation, the power of Parliament to enact legislations whether by substantive law or subsidiary legislation is curtailed by Article 107. Articles 20 and 18 of the Constitution also prohibit expropriation of a person’s property, which includes bonds,” he said.

Mr Dame further said it would also be unconstitutional for the President to exercise his powers under Article 31 of the Constitution to declare an emergency due to the economic situation in order to vary the rights of bondholders.

“Article 31 talks about natural disaster, riots and even then, there is a procedure. Debt restructuring which may require the government to vary terms of its bond agreements will not constitute an emergency permitting the President to invoke emergency powers upon him by the constitution,” the A-G added.

On December 5, last year, the Minister of Finance launched the government’s voluntary DDEP as part of measures to reduce the debt burden and give the government some breathing space to deal with the fiscal challenges facing the country.

With the DDEP, domestic bondholders face steep interest rate cuts and the lengthening of tenor on their investments.

In addition, domestic debt investors will be asked to exchange their existing securities for 12 new ones, each of which offers a zero coupon (interest) in the first year and five per cent in the second year, 2024.

For bonds that are maturing this year, the government is offering to pay a two per cent cash fee on the outstanding value in return for extending the tenor of new bonds to be issued to them to mature between 2027 and 2033.

For holders of bonds that will mature after 2023, their 12 new bonds will attract coupons of eight and nine per cent between 2024 and 2038. Under this arrangement, it is expected that a bond will mature each year, starting from 2027 to 2038.

Holders of short-term debt securities, comprising Treasury bills of 91-day, 182-day and 364-day, are excluded from the DDEP.