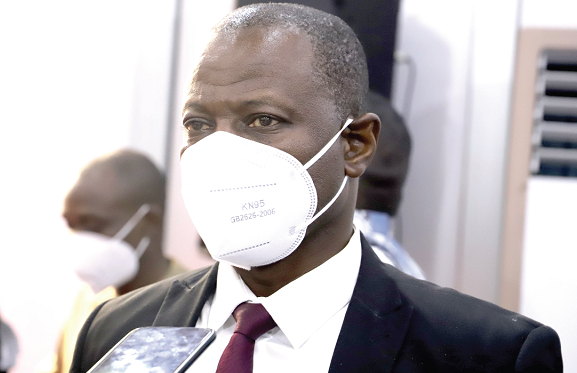 The Ghana Health Service (GHS) has urged church workers, such as pastors, choristers and members of protocol, to always be in their face masks when engaged in church activities.

This follows the outcome of a survey to determine the level of adherence to COVID-19 safety protocols in churches, which showed that the percentage of people wearing face masks among church workers, such as pastors, choristers and ushers, had reduced, while that of the general congregation had gone up.

At the Minister’s Press Briefing on the National COVID-19 situation in Accra yesterday, the Director-General of the GHS, Dr Patrick Kuma-Aboagye, said it was critical for church workers who carried out activities involving singing and talking to always be in their face masks because COVID-19 was transmitted through droplets.

“The emission of droplets infected with COVID-19 is high during preaching, singing and other talking activities. This is why we recommend highly that all these groups of church workers adhere strictly to the protocols,” he added.

According to the survey, the proportion of congregants wearing face masks correctly was 92 per cent, compared to 86 per cent among ushers, protocol and security.

And among pastors, priests and elders, it was 83 per cent, while among choristers and singers, it was 63 per cent.

According to him, face mask wearing among adults and children was generally better in the morning (52 per cent) than in the afternoon (41 per cent).

Dr Kuma-Aboagye said the death toll had also risen from 464 to 472.

Out of the total confirmed cases, 26,785 were recorded by General Surveillance; 44,390 cases from Enhanced Contact Tracing, while 1,153 were recorded among international travellers disembarking at the Kotoka International Airport (KIA) since it was reopened on September 1, 2020, he said.

In all, 810,040 tests for the virus have been conducted in the country.

Those with severe conditions are 114, with 34 in critical condition.

The cases are being managed at treatment sites and isolation centres across the country, while some are being cared for at home.

According to Dr Kuma-Aboagye, the daily case incidence had been rising since the end of December last year.

The figures had, however, remained stable since last week, he added.

He said the Greater Accra Region remained the hotspot of the virus, accounting for more than 50 per cent (3,431) of active cases and with a cumulative case count of 42,312.

Dr Kuma-Aboagye said so far, there had not been any reported case of COVID-19-related deaths in schools, even though some cases had been recorded in some schools within the Greater Accra, Eastern, Central and Upper West regions.