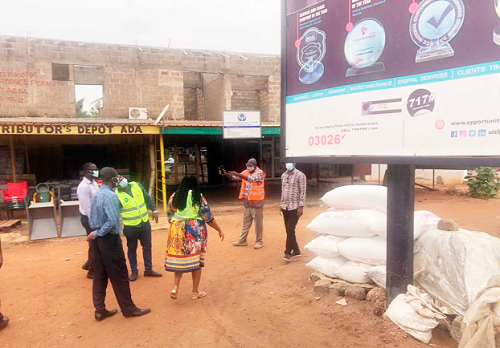 The Greater Accra Regional Coordinating Council (GARCC) has urged assemblies in the region to enforce the standards involved in the management of outdoor advertising to ensure the safety of lives on the roads.

It observed that outdoor advertisements had become a clutter along the roads, particularly major highways, and that they posed a threat to road safety and appeared to affect the beauty of the region.

It said the situation suggested that the assemblies were not following the rules as far as safety was concerned.

The Deputy Director in charge of Administration at the GARCC, Mr David Aboagye, therefore, urged the assemblies to ensure that advertisers conformed to the standards on outdoor advertisement before giving them the green light to mount any billboards.

Mr Aboagye made the comments when he led a team to visit some four assemblies last Thursday to sensitise them to policy guidelines on the placement of signages to enable them to effect the needed changes in their respective areas.

The team, which consisted of members from the GARCC, the Advertising Association of Ghana (AAG) and the National Road Safety Authority (NRSA), visited the Ada East, Ada West, Ningo-Prampram District assemblies and the Kpone-Katamaso Municipal Assembly.

It was observed during the tour that billboards and sign posts were commonplace in those areas.

Many of them looked dilapidated and appeared to pose some threat to motorists and pedestrians.

Those advertisement boards were in different sizes, while some were mounted close to the road.

According to the Ghana Standards Authority requirements on outdoor advertising, billboards must be mounted and aligned in a manner not to obstruct road signs and must not be more than 1.8 metres from the ground.

However, these laws seem to have been ignored by advertisers due to the high demand for brand and brand promotion in the areas.

Mr Aboagye, who is also the Secretary of the Greater Accra Regional Outdoor Advertising Technical Committee, noted that some of the assemblies were failing to comply with the standards because they saw the situation as a means to rake in internally generated funds.

He, however, said enforcing the laws would rather fetch more money for them.

“The advertiser usually takes one small space, then litters the place with many signages, and pays very little to the assembly, while companies are willing to pay the right price should they enforce the 200-metre spacing on billboard advertisement.

“The companies are willing to pay huge sums of money for advertisement, but they don’t want to see any competition around them in terms of exposure and the visibility, and that is what these assemblies are failing to enforce,” Mr Aboagye explained.

He said drivers and pedestrians were the main reasons for road construction, and that road designers did not take into consideration outdoor advertising.

He said advertisements were after thought and must, therefore, not interfere with the safety of road users.

The deputy director, therefore, urged the assemblies to institute an action plan to clamp down on unauthorised billboards to ensure sanity in their areas.

The Executive Director of the AAG, Mr Francis Dadzie, also stressed that the association would not relent in its effort to ensure that the situation became a thing of the past.

He said, already, AAG members had been educated on the issue and they were ready to support the GARCC to swing into action.

“This time around we are not going to spare anybody; we are ready to collaborate with the assembly and ensure that the right thing is done, and we won’t rest until that is achieved,” Mr Dadzie stressed.