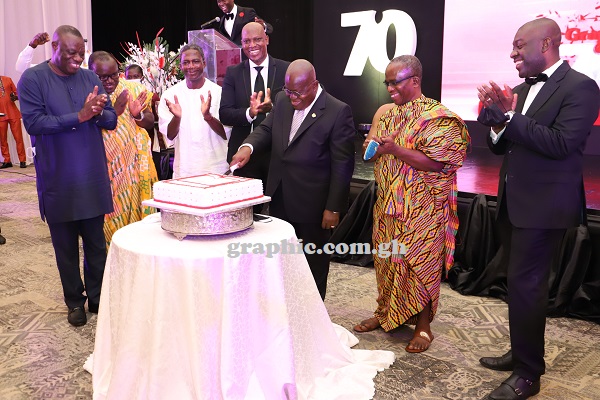 The President, Nana Addo Dankwa Akufo-Addo, has called for a concerted effort to eliminate fake news from the Ghanaian media landscape and the fabric of society.

He said it was great that people no longer had to wait till the following morning to find out what happened the previous day, thanks to technology.

However, the same technology, he indicated, was being used to promote the phenomenon of people manufacturing falsehood and fake stories, which easily passed as news.

“It is not only alarming but also poses a serious threat and danger to the very fabric of society. We must all make a concerted effort to eliminate this phenomenon from our media space,” he stressed.

President Akufo-Addo made the call in a keynote address at a ball organised last Saturday at the plush Labadi Beach Hotel as part of activities climaxing the 70th anniversary of the Graphic Communications Group Limited (GCGL).

The event was a night of celebration, as it attracted as many people as possible who had played pivotal roles in the company, including all living former managing directors, editors and staff of the company, as well as clients and contributors, to reminisce over the 70-year journey.

It was also used to celebrate many forebears for their role in helping keep Graphic as the industry leader.

As difficult as the task of helping keep fake news out might be, the President implored the Daily Graphic, which has survived 70 years with excellent journalism, and its sister brands to lead the charge to cure the growing canker.

He said the Graphic brand owed it to its credibility to lead that charge, as attempts had been made to post false stories on websites set up deliberately to look like the official Graphic website.

“I hope that Graphic will resist the temptation to join in the rush to be first in the news and end up giving credence to false and malicious stories. If you go down that road, future generations will not ask: ‘is it in the Graphic?’, a sign of authenticity, or say ‘I read it in the Graphic’ as the final words of all conversations and an end to all arguments.

“This is a hard-won reputation and it is useful for our own country that we have a reference point that we can trust,” he emphasised.

President Akufo-Addo paid glowing tribute to Ghanaian journalists, especially those from the Graphic stable, for their forefront role in the struggle for independence for the country and urged them to take a lead role again in the battle for a united, modern, prosperous and democratic Ghana.

He expressed optimism that just like Ghana, the future of the Graphic Group was bright and urged staff to create a sound modern ethos that encompassed all the modern technology and the challenges of the new media.

He further challenged the current generation of staff of the Daily Graphic and its sister brands to work assiduously to uphold the best standards and professionalism the brand had carved for itself over the last 70 years.

The President explained that the New Patriotic Party (NPP) knew what it meant to be shut out from the state-owned media and recounted how, as a lawyer, he had to argue cases at the Supreme Court which liberated the state-owned press houses to do what was right.

He described as one of the highest points of his professional career the day he had to argue before the Supreme Court in the matter of the NPP versus the GBC.

He said he was proud, as the then Attorney-General and Minister of Justice who was instrumental in repealing the Criminal Libel law, which had been in the statute books since colonial times, a move that had strengthened the freedom and accountability of the Ghanaian media.

“We in the NPP believe in the triumph of superior argument and not in the silencing of dissenting voices, no matter how poisonous,” he added.

President Akufo-Addo singled out the Daily Graphic for commendation as a lead advocate, particularly during the outbreak of the coronavirus disease (COVID-19) pandemic, emphasising that the paper continued to play a key part in creating awareness among Ghanaians of the need to comply with the hygiene protocols to defeat the pandemic.

He added that the GCGL had been joining other media houses to propagate his regular Sunday night broadcasts to the nation.

“I am very grateful for your input and will depend on it until we have completely won the battle against the virus,” he said.

The President expressed regret that despite the efforts by the police, perpetrators of the murder of the investigative journalist, Ahmed Hussein-Suale, were still at large, but gave an assurance that the case would not be closed till they had been brought to book.

He said there were some in the media who were sceptical about democratic governance and blamed all the ills of society on politicians operating in the democratic framework, with others preferring authoritarian rule because they claimed democracy was cumbersome and there was the need to get things done in a hurry.

He conceded that there was some work to do to convince such people that they were safer under democracy, and quoted Winston Churchill, the British war-time Prime Minister, who said: “Democracy is the worst form of government, except all those otherwise that have been tried from time to time.”

Also, media freedom had been deepened, while there was attachment to the rule of law, respect for individual liberties, human rights, the principles of democratic accountability and social justice.

Reacting to appeals by the Chairman of the National Media Commission (NMC), Mr Yaw Boadu-Ayeboafoh, President Akufo-Addo gave an assurance that he, together with the Minister of Information, would ensure that the debts state institutions owed the GCGL from newspaper subscription and adverts were paid.