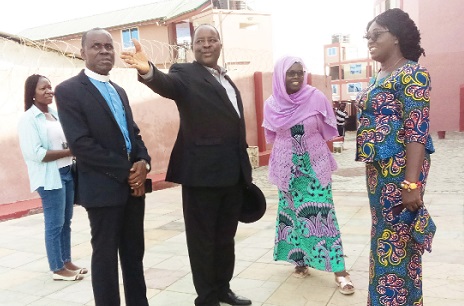 Francis Essel-Okyeahene (middle), CEO of Onua Francis International School, showing Gifty Twum Ampofo (right), Deputy Minister of Education, around the school infrastructure. With them are other officials of the school
30.5k Shares

A Deputy Minister of Education, Gifty Twum Ampofo, has called on parents to allow their smart children to pursue technical vocational education and training (TVET), if they desire to.

She said the government had done a lot of investments with the provision of equipment and the retooling of institutions to adequately equip students with the skills and knowledge needed.

“You cannot say that because your child is not smart he should go and do TVET. You need to make sure that your child is interested in doing TVET.

“Gone were the days when people thought that it was for children who were not serious. TVET is for everybody, provided you have a head, you have your heart, you have your hands to do the skills,” she said.

Ms Twum Ampofo said this on the sidelines of the maiden graduation of the Onua Francis International School at Gomoa Buduburam in the Central Region.

The event, which was on the theme: “Empowering the Younger Generation With Quality Education for Better Future”, was also used to inaugurate the school’s dining hall and the boys and girls dormitories.

Ms Twum Ampofo advised young learners to also develop interest in pursuing TVET courses so as to acquire skills to set up their own businesses to ensue easier employment opportunities than to wait on government for jobs.

She said the government had done so much in the TVET sector that it had not even exhausted all that it had started to do in that field.

Ms Twum Ampofo said the country was not doing well because emphasis was not put on things such as TVET which was critical for national development and part of the solution to addressing unemployment.

“This time our eyes are opened, and TVET is for the crème de la crème,” she said.

The Chief Executive Officer of the school, Francis Essel-Okyeahene, said the institution was set up three-and-a-half years ago to provide education to children in and around the Buduburam area who did not have access to the facilities it had.

“We wanted to bring a school that would provide unique and quality basic education to children living far and near,” he said.

The event was interspersed with activities such as poetry recitals, choreography and cultural performances.

The graduation was for students that completed their Basic Education Certificate Examination (BECE), as well as those from class six going to junior high school and from kindergarten to class one.

Mr Essel-Okyeahene also urged the government to create an enabling environment for private schools to thrive in the country.

The Superintendent Minister of the Methodist Church in Toronto, Canada, Very Rev. Emmanuel Evans Essien, commended the proprietor for the establishment of the school, and called on parents to invest in the education of their children and to stop wasting money on frivolous ventures, including funeral cloths.