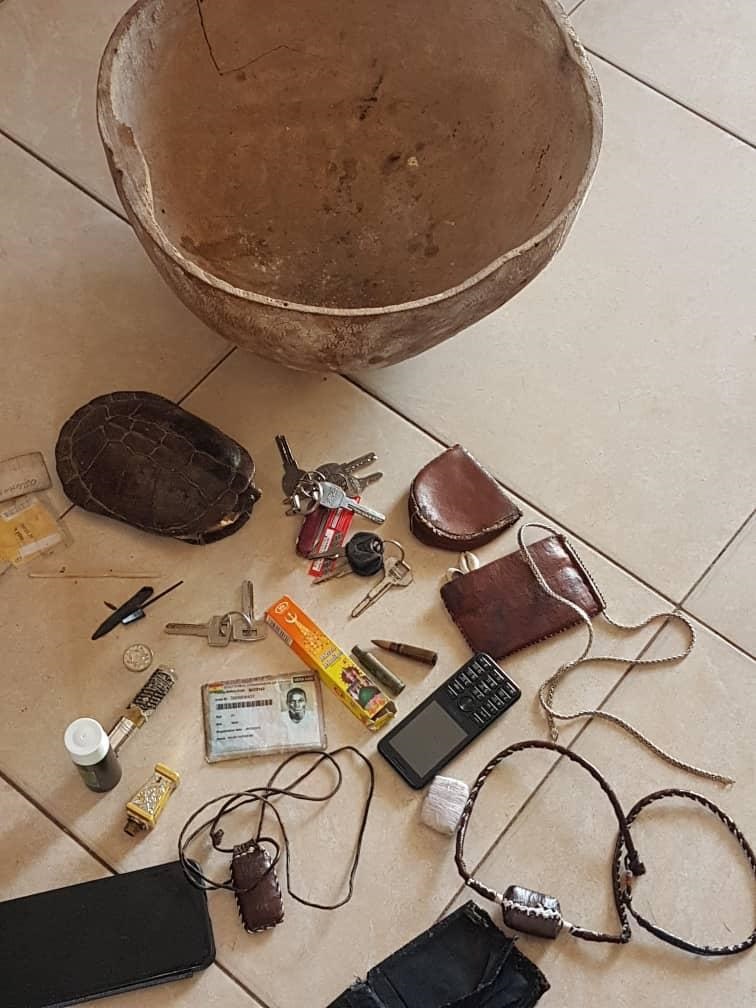 A tortoise and some items including a talisman were found at the scene where the suspected robber was killed
30.5k Shares

A team of officers from the Criminal Investigations Department (CID) in the Western Region, with support from officers from Accra, last Wednesday night gunned down a suspected robber believed to be at the centre of last Monday’s daylight robbery and murder of a Switzerland-based Ghanaian.

Another suspect, Inusah Fuseini, 25, who was met at a hideout, has been arrested.

Police found on Fuseini a live tortoise, talismans, a spent AK-47 ammunition, among other items.

The Regional Police Public Relations Officer, Deputy Superintendent of Police (DSP) Olivia Ewurabena Adiku, said the swoop at the Takoradi Market Circle was an intelligence-led operation to arrest suspects who were wanted in connection with the recent robbery and murder.

She said the police CID in the region and the team from Accra closed in on the suspects at Elimna along the Cape Coast-Takoradi road, where “in an attempt to arrest the suspects, they engaged the police in a shootout”.

DSP Adiku said during the exchange of gunfire, one of the suspects — who was later identified as Shankiki, and about 30 years old — was gunned down, while two others managed to escape on a motorbike.

The police revealed that Shankiki was also riding a motorbike with the registration number M-20 GW 6060, but he had used a sticker to conceal the last digit apparently to outsmart the police.

It was only when the police recovered the motorbike that it became clear the number should not have read M-20 GW 606 as was displayed.

The Western Regional Police PRO said efforts were underway to arrest those on the run, and called on residents of the region to remain calm.

The police said those who escaped might have sustained some injury, and urged the public to be on the lookout for persons with gunshot wounds and to alert the police of any strangers in their communities or hospitals.

Currently, residents in the Western Regional capital, Sekondi-Takoradi, are said to be living in fear due to an increase in daylight robberies, where the perpetrators use motorbikes across the metropolis and adjoining municipalities for the operation.

The incidents across four days, carried out in the afternoon and evening, left one person dead and two others in critical conditions, as the robbers made away with thousands of cedis.

About five robbery attacks on mobile money vendors and residents of Sekondi-Takoradi across four days left one person dead.

The robbers were said to have made away with various sums of money.

The Western Regional Police Command promised a GH¢10,000 reward for anybody who would give information leading to the arrest of any of the suspects.