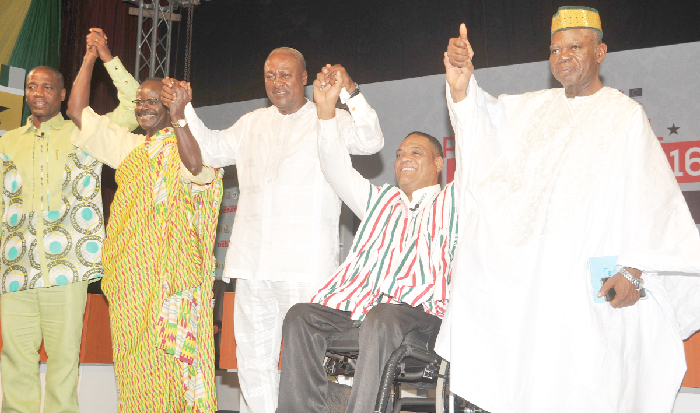 Five of the seven candidates contesting this year’s presidential election contend that the country’s current educational system does not adequately meet the needs of the industrial sector.

Slugging it out last Wednesday at a presidential debate jointly organised by the Ghana Broadcasting Corporation (GBC) and the National Commission for Civic Education (NCCE), four of the candidates responded with an emphatic ‘no’ to a question posed by a co-moderator, Mr Daniel Afari-Yeboah, on whether Ghana’s current educational system adequately prepared students for industry and national development.

The fifth candidate, President John Dramani Mahama of the National Democratic Congress (NDC), also agreed with the assertion but stated that a lot of progress had been made in that direction.

Setting the tone for the debate, Mr Yeboah said the current educational system was copied from another country and, therefore, the products were only fit to solve the problems of that country.

He made an urgent call for Ghana to develop its own educational system to cut down on the reliance on a system handed down by our colonial masters, which he said had resulted in a huge gap between education and industry.

He underscored the need for an Education Commission to be set up to investigate the current challenges and reform the sector to concentrate more on technical and vocational education.

At his turn, Dr Nduom stated: “Majority of people do not get past junior high school (JHS). How can that be something that we desire? We must become competitive because the world is not waiting for us. We need a minimum of high school education.”

He said the country had a fundamental problem which must be solved because children were not going to school.

Dr Nduom warned that the country was preparing itself for disaster and economic challenges if education was made the preserve of the few who could access and afford it.

For his part, Mr Greenstreet said no nation had been able to chalk up success unless it looked critically at its educational system.

He described the problems associated with the educational system as “complex problems that require a non-partisan approach”.

“I will introduce critical thinking at the kindergarten level and counsellors to counsel students in the line where they have skills. I will introduce scholarships and bursaries and also eradicate the high level of illiteracy in five years. The current system must be overhauled,” he stated.

President Mahama stated that a lot of academic institutions were not producing enough skilled manpower to meet the needs of industry, which was why his government was re-orienting the educational system to produce skilled personnel and middle manpower for industry.

He rebutted Dr Nduom’s assertion that many children of school age were not attending school, saying that about 97 per cent of such children were currently in the classroom.

On what could be done by way of policy to revitalise technical education, Dr Nduom said the subject could not be broached when children were not going to school.

He stated that in his government, opportunities would be offered for all children at all stages to ensure they had access to technical education.

President Mahama said Ghana was investing in the area of technical education more than ever, adding that polytechnics had been made more attractive under his government by converting them into universities.

Stating the importance of technical and vocational education to the country’s development, Mr Greenstreet said his government would allocate resources to the area and build on the good work of previous governments.

For Dr Mahama, technical training that gave people confidence was not being done.

“Wherever the training is, it has to be linked with industry,” he said.

Mr Yeboah said he would adopt a policy to upgrade existing vocational schools and ensure that the country refocused in terms of strategic processes.

Other thematic areas debated on were health, youth unemployment and energy.

To preempt the messages of change that were to come from his opponents later in the night, President Mahama said while change was exciting, it was not an easy solution.

Mr Greenstreet drummed home what had become the CPP’s mantra: that it achieved political independence for Ghana and was now poised for the economic version.

His first shots for the night were aimed at the NDC and the NPP, which he accused indirectly of dividing the country into tribal ‘world banks’.