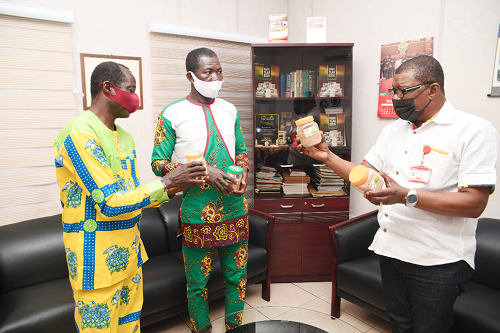 The Editor of the Daily Graphic, Mr Kobby Asmah, has lauded the Kantanka Group of Companies for championing innovation in diverse fields.

He said the feats of the group were providing a foundation for the country to achieve its transformational agenda.

Mr Asmah said that when officials of the Kantanka Organic Farms called on him last Friday to show him beverage products made by the group after four years of research by the  Kantanka Agriculture Research Centre.

The call on the editor was also to seek the support of the Daily Graphic in projecting Kantanka’s agro processing activities, considered a viable platform with the potential to advance Ghana’s economic growth.

“Apostle Kwadwo Safo is doing amazing things, and what he and his Kantanka Group have done now holds immense potential for job creation,” Mr Asmah said.

Apostle Safo has spearheaded an agenda to encourage a move from non-organic to organic farming as a way of improving the  health of the people.

Through research by the Kantanka Agriculture Research Centre, agricultural products such as organic plantain, cassava, cocoyam and potatoes are being processed into beverages.

The group is, however, yet to enter into commercial production.

The processing of the food items is also in line with the Kantanka Group’s vision to help address post-harvest losses.

Mr Asmah urged the Kantanka Group of Companies to seek stronger collaboration with the Foods and Drugs Authority (FDA) to drive the group’s food processing initiatives.

He said it was refreshing that the Kantanka Group had begun processing various foodstuffs produced from the Kantanka Organic Farms, but added that the quest to reap the desired results would materialise when the FDA, which was the regulation body, was fully involved in the process.

“I appeal to you to collaborate with the FDA because that is what the law says. The key part is that, they will put their seal on the products, which will give you the authority to even export,” the Editor said.

Mr Asmah described Kantanka as a solid brand, whose innovative acumen was without question.

Nevertheless, he stated that efficacy and safety concerns required the involvement of the FDA in the processing of edibles.

Mr Asmah noted that the initiatives undertaken by the Kantanka Group over the years tied in with the government’s industrialisation agenda.

He said the food processing activities would help in advancing the One district, One factory (1D1F) agenda driven mainly by the private sector.

“The government is providing the enabling environment for the private sector to grow, and I expect Kantanka food processing to make full use of this opportunity,” he said.

Briefing the editor on the initiative, the Public Relations Officer of the Kantanka Organic Farms, Mr Kwaku Adu, said Apostle Safo, who was the Founder of the Kantanka Group, had demonstrated ingenuity with the research into the agro processing aspect of the business.

He said it took about four years for the research to be completed.

Expressing concern about how farm produce go waste because they cannot be processed, the PRO said the way to go was for the nation to invest in agro processing.

“This is what we at Kantanka have taken upon ourselves to do,” he said.

Also at the meeting was the Farm Manager, Mr Akwasi Atwere.