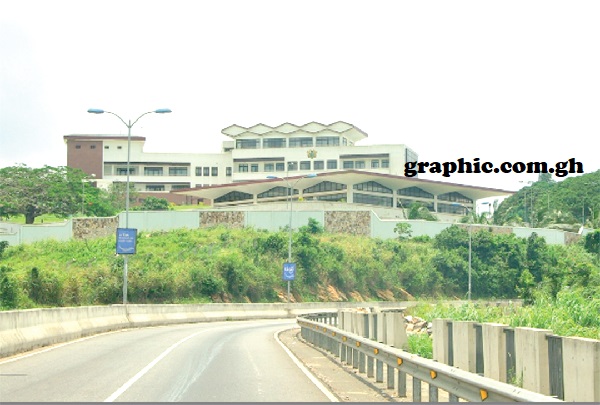 The Peduase Lodge — Venue for the ECOWAS Summit

West African leaders are arriving in the country this morning to participate in an extraordinary ECOWAS Summit.

The summit, which will be held at the Presidential Villa at Peduase, near Aburi in the Eastern Region, will discuss ways of helping to resolve the governance crisis in Mali.

Presidents S.E. Patrice Talon of Benin, Roch Marc Christian Kabore of Burkina Faso, Jorge Carlos Fonseca of Cabo Verde, Alassane Ouattara of Cote d’Ivoire, Adama Barrow of The Gambia and Alpha Conde of Guinea are among the Heads of State and Governments of ECOWAS who will attend today’s meeting at Peduase.

Others are Presidents Maro Sissoco Embalo of Guinea Bissau, George Manneh Weah of Liberia, Mahamadou Issoufou of Niger and Muhammadu Buhari of Nigeria.

The rest are Presidents Macky Sall of Senegal, Julius Maada Bio of Sierra Leone and Faure Essozimna Gnassingbe of Togo.

The Presidents and Heads of Governments will start arriving from 9 a.m. today for the one-day summit, which will also have all the stakeholders in the Mali crisis in attendance.

The deposed Malian President, Ibrahim Boubacar Keita, will not attend the summit, convened by the Chairman of ECOWAS and President of Ghana, Nana Addo Dankwa Akufo-Addo.

However, the military junta in Mali, led by Colonel Assimi Goita, which seized power on August 18, this year, will be at the summit.

The junta, calling itself the National Committee for the Salvation of the People, has promised to restore democratic governance within 12 months, following the intervention of ECOWAS, which sent a delegation, headed by a former President of Nigeria, Goodluck Jonathan, to Mali on August 23.

The Peduase Summit will be a family affair, as international bodies and foreign diplomatic/development partners will not attend.

It will, therefore, stand as West Africa dealing with its own affair the family way.

The Daily Graphic has gathered that President Akufo-Addo, who will steer affairs at today’s summit, will stress the need for the restoration of peace and stability in the Sahelian country, which also witnessed a coup d’etat in 2012.

The discussions will also touch on how to quickly appoint civilians to form a transitional government towards the restoration of democratic rule in not more than 12 months.

This is because stability in Mali is germane to West African peace, as jihadist elements had used that country as a launchpad to foment trouble in other West African countries, including Burkina Faso, Nigeria and Cote d’Ivoire.

Some East African countries such as Kenya and Eritrea have not been spared.

ECOWAS has been leading mediation efforts since the coup and the resurgence of demonstrations.

The mediation efforts include the 57th Ordinary Summit of the ECOWAS Authority in Niamey, Niger, on Monday, September 7, this year, where the Heads of State reaffirmed their determination to ensure that constitutional order was quickly restored in Mali, with a political transition led by a civilian President and a Prime Minister for 12 months.

The Minister of Foreign Affairs and Regional Integration, Ms Shirley Ayorkor Botchwey, told newsmen last Sunday that ECOWAS had maintained all the decisions taken at its Extraordinary Summit of August 28, this year, and noted that the ongoing consultations among Malian stakeholders were initiated by the National Committee for the Salvation of the People.

She said the authority also directed that the Head of the Transitional Government and the Prime Minister, both civilians, be appointed not later than September 5, this year.

The summit is expected to lead to the blocking of some major roads and traffic management in Accra to facilitate the smooth movement of ECOWAS Presidents from the Kotoka International Airport to the meeting venue at Peduase through the National Road Four (N4), otherwise known as the Accra-Tetteh Quarshie-Adenta road.

The officer in charge of traffic management of the Ghana Police Service, Superintendent Dr Sasu Mensah, said policemen would be deployed to critical intersections on the route from Accra to Peduase and from Peduase to the KIA to ensure the smooth flow of traffic and assist motorists on roads that would be used by the dignitaries.