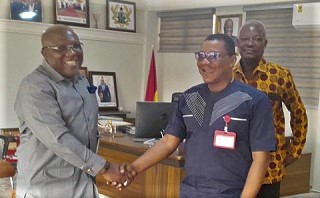 Kobby Asmah (right), Editor of the Daily Graphic, being welcomed by Seth Kwame Acheampong, Eastern Regional Minister, to his office. With them is George Folley, regional correspondent of the Graphic
30.5k Shares

He said the content of the company’s various brands, particularly the flagship Daily Graphic, had been factual, making it the preferred choice of readers.

The minister gave the commendation when the Editor of the Daily Graphic, Kobby Asmah, called on him at his office in Koforidua last Monday.

Mr Asmah, who was in the regional capital on a day's working visit to the GCGL Regional Office, found time to visit the Regional Minister and the Omanhene of New Juaben, Daasebre Kwaku Boateng III.

The regional minister said the authenticity of the Daily Graphic and its sister papers placed the company’s publications far above other media, saying some of them fabricated stories to suit their interests.

Mr Acheampong said apart from the Daily Graphic reporting factual events, the contents were much fair and balanced.

"I always read the Daily Graphic because its reports are factual and balanced unlike other communication mediums which distort facts and at the same time are one-sided.

“The Daily Graphic is noted for its accuracy at all times," he said.

Mr Acheampong indicated that the Daily Graphic was still the leading newspaper in the country, and said it had also been the first to break any news worthy of the name.

The minister expressed the hope that the company would continue to perform creditably to project the region and the country as a whole in a positive light.

Mr Asmah sought cooperation from the regional administration, the New Juaben South Municipal Assembly, the New Juaben Traditional Area and the various local government and traditional authorities with the Daily Graphic for the mutual development of business and the local areas.

That, he explained, would enable the Daily Graphic to properly highlight the development of the region, particularly the execution of projects by the government.

Mr Asmah indicated that the partnership would also offer reporters of the GCGL the opportunity to highlight issues of relevance to project the areas for potential investment opportunities.

He noted that the region had not been adequately covered, and, therefore, needed the exposure to attract the required investment.

He called for the deepening of relations between the company and the Regional Coordinating Council to enable the GCGL brands to cover the region adequately.

At the Yiadom Hwedie Palace, Mr Asmah said his visit to the New Omanhene was to cement the cordial relations that existed between the GCGL and the palace during the time of the late Omanhene, Daasebre Professor Emeritus Oti Boateng, whom he described as a personal friend. 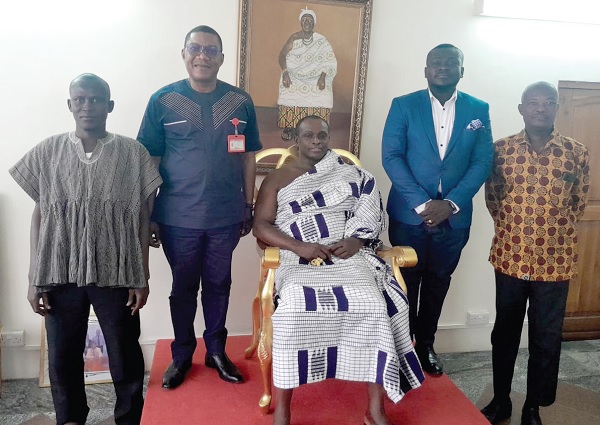 Mr Asmah assured the Omanhene of GCGL's continued support in covering activities of the paramountcy just as it did for the late Omanhene.

Daasebre Kwaku Boateng said his ultimate objective was to make the traditional area a development hub to attract more investors.

He, therefore, called for the support of the people in the area and the GCGL to enable him to improve the lives of the people.

He commended the GCGL for giving the traditional area factual reportage during the funeral and burial rites of the late Omanhene, Daasebre Oti Boateng.