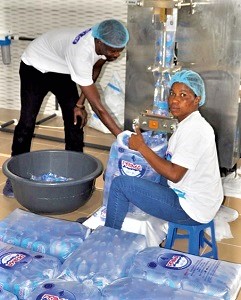 Some of the workers at work
30.5k Shares

The Prime Natural Mineral Drinking Water Limited, which has an initial production capacity of 2,000 water sachets daily, will soon start production in bottles.

It targets markets in the country and neighbouring Togo with its Prima water brand.

The facility has a production room, treatment area, tank farm, hygiene station, changing rooms, loading bay and an administration wing, with a work force of about 20.

The Moderator of the General Assembly of the EPCG, the Rt Rev. Dr Lt Col Bliss Kofi Agbeko, who performed the ceremony last week Thursday, said the project, which sought relief and jobs for people in the area, was in line with church’s stance to support development in the communities with great zeal and enthusiasm.

“This is rooted in our conviction that service to mankind is service to God,” he maintained.

The Moderator expressed gratitude to the traditional authorities of Tsito for their immense support for the project which, he said, bore ample testimony of the cordial working ties between the EPCG and the chiefs.

Rev. Dr Agbeko said the water project would be replicated in the rest of the 14 presbyteries of the church and appealed to the congregation and public-spirited individuals to support the speedy realisation of that plan.

The EPCG, he said, had reached a phase in its ministry with greater emphasis on industry to evangelise to as many people as possible.

He made it clear that the water factory would operate purely on commercial basis, with a focus on promoting development to reduce vice in the community.

The Fiaga of Tsito, Togbe Gobo Dake XII, said the EPCG had played important development roles in the community for many decades, adding that the Prime Natural Mineral Drinking Water Limited would elevate Tsito to greater social and development heights.

He pledged the support of the traditional authorities to the EPCG in its efforts to boost the operations of the water factory and in all other development undertakings of the church.