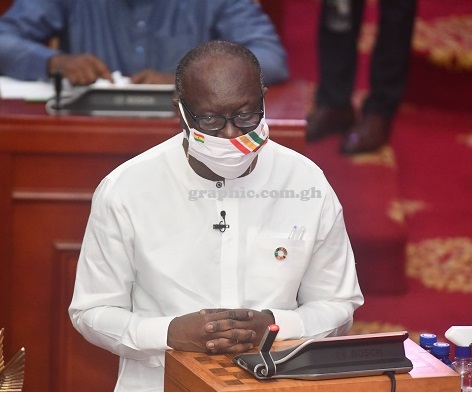 The Minister of Finance, Mr Ken Ofori-Atta, has said the proposed E-Levy is not regressive but a comprehensive system to get all potential taxpayers to contribute their quota to national development.

He said the rate of 1.5 per cent and the exemption of the first GH¢100 transfer per day meant that the tax was pro-poor and, therefore, not regressive.

He added that the levy, whose proposed rate had been reduced from 1.75 to 1.5 per cent, was the most effective way to widen the tax net and raise adequate revenue to prosecute the government’s agenda and provide jobs for the youth.

Mr Ofori-Atta gave the explanation when he spoke with the media last Saturday on the sidelines of the 24th meeting of the Ministerial Committee of the Inter-Governmental Action Group against Money Laundering in West Africa (GIABA), which he chairs.

He said the ongoing town hall meetings across the country had afforded him the opportunity to properly explain the dynamics of the tax to the populace, saying that it had been well received.

“Ghanaians are largely in favour of paying the E-Levy, contrary to the impression being created from Parliament,” he told newsmen.

Consequently, the minister expressed optimism that the government would be successful at securing parliamentary approval for the levy, which had initially been billed to take off on February 1.

Tax of the future

Commenting on the status of the E-Levy, Mr Ofori-Atta noted that the current situation where only 2.4 million people were paying direct taxes when estimates showed that about 20 million people should be paying, needed to change if the country wanted to adequately fund its development aspirations.

He explained that after various analyses, the E-Levy became the most potent avenue to rope more people into the tax bracket.

He said e-commerce had become the business of the future, with almost every Ghanaian participating in it.

Mr Ken Ofori-Atta (2nd from left), the Finance Minister, speaking to some journalists after the 24th Inter-Governmental Action Group against Money Laundering in West Africa Technical/plenary meeting and the GIABA Ministerial Committee meeting in Accra over the weekend

Citing the strong growth in the value of mobile money transactions from GH¢78 billion in 2016 to almost GH¢950 billion last year, Mr Ofori-Atta said: “Clearly, it is a tax handle for the future and we must engage it so that we can support our debt, our employment and our infrastructure.”

“As a friend told me, we have a system of taxes with everybody holding buckets where they can bring in or dodge. Now, we have brought a water-hose system of which everybody will be in there so that we can all contribute,” he noted.

Read also: Choices for government on E-Levy: Notes from Journalists for Business Advocacy

Mr Ofori-Atta added that while there might be other alternative tax handles, the E-Levy was the most effective, given its ability to get everybody to contribute.

“There are always many alternatives, but you are looking at the future and how you can get everybody to contribute. I think this may be the most effective way,” he said.

The E-Levy was announced in the 2022 Budget in November last year as a tax on electronic transactions, including mobile money.

The announcement was, however, met with disagreement from the National Democratic Congress (NDC) in and outside Parliament, leading to the stalling of the processes to pass the E-Levy Bill.

Various experts, including the statesman, Mr Kwame Pianim, have kicked against the levy, describing it as anti-technology and a drawback to financial inclusion and the cash-lite agenda.

The Finance Minister has been leading a team of government officials to town hall meetings to canvass public support for the levy.

Mr Ofori-Atta said the team would be in the Upper West Region this week for town hall meetings.