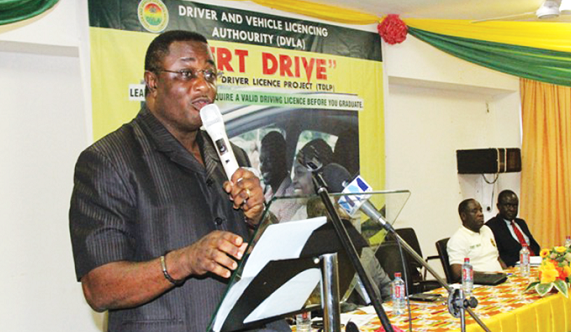 The Driver and Vehicle Licensing Authority (DVLA) has launched a tertiary driving licence project to allow students in tertiary institutions obtain driving licences before they graduate from school.

The ‘TERT Drive’ is expected to eliminate students’ use of fake driving licences and driving without licences which are rife among students.

The product was developed in response to the growing need of tertiary students to obtain genuine driving licences before the completion of their respective academic and professional studies.

All processes leading to the acquisition of a driving licence, such as training, testing, personalisation and issuance of licence, will be done on campus.

As part of the initiative, tertiary institutions are allowed to establish their own driving schools, with the approval of the DVLA, or work with DVLA-approved driving schools.

The students will pay the exact statutory amount the public pays to get their licences. They will, however, enjoy some discount at the driving school.

Currently, it costs GHc240 to acquire a driving licence, with a little over GHc600 as the cost of training at a driving school.

To enrol on the programme, a student must be 18 years and above, physically and mentally fit to drive, provide an admission letter, a valid national identification card, including a passport, and a resident permit (in the case of foreign students).

A Minister of State at the Presidency, Mr Elvis Afriyie Ankrah, who launched the initiative, commended the DVLA for “the unique and innovative product”.

“It was designed after a careful study of the challenges that young people go through in an effort to acquire genuine driving licences,” he indicated.

For some time now, the DVLA has been criticised for delaying in processing driving licences, poor customer service and the practice of ‘goro’ boys.

Many students have fallen victim to the activities of unscrupulous middle men (goro boys) who exploit the bureaucracy at the DVLA to enrich themselves.

“It is my expectation that this product, coupled with other strategic initiatives and the recently rolled out mobile services, will contribute to the enhancement of customer service and the elimination of ‘goro’ boys,” he added.

The NRSS III is  the “blueprint” for all road safety interventions in the country for the period 2011 to 2020, with the broad objectives of improving road safety management, ensuring safer mobility, safer vehicles and safer road-users.

It will also improve emergency response and enforcement in line with global concerns.

Mr Appiah said some tertiary institutions that had bought into the idea had expressed their willingness to establish their own driving schools.

“The DVLA will support institutions that will take advantage of this product to use their institutions for training. One public institution has taken the lead to make the acquisition of driving licences mandatory for its students,” he said.

Participating institutions would be required to provide classrooms for the theory aspect of the training and a dedicated place for practical training, he said.