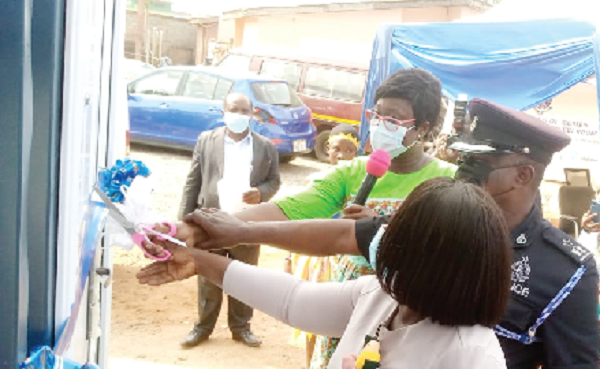 Statistics available at the Domestic Violence and Victims Support Unit (DOVVSU) of the Ghana Police Service indicate that 1,047 girls were defiled, while 305 women were raped in 2020.

The Director-General of the Criminal Investigations Department (CID), Mr Isaac Ken Yeboah, has described the statistics as alarming.

He disclosed the data in a speech read on his behalf by the Director of DOVVSU, Chief Superintendent of Police Ms Owusuwaa Kyeremeh, at the inauguration of an interviewing room for people who suffer domestic and gender-based violence (GBV) for the Madina DOVVSU.

Although Mr Yeboah did not share figures on cases of defilement and rape in the past, he said about 1,500 cases of violence against women were reported to law enforcement agencies annually.

The number of reported cases, he indicated, was less than the actual number of incidents that occurred.

The interviewing room has been set up in line with the vision of DOVVSU, which is to create an environment where domestic violence and other forms of abuse will be freely reported and collaborate with stakeholders to provide coordinated timely responses for victims.

It is expected to provide a congenial environment, such as privacy, to encourage victims and survivors of GBV to freely share their ordeal with investigators to facilitate investigations and prosecution of perpetrators.

The room is furnished with comfortable seats, a play area, learning items for children, flowers and other materials to make especially children feel at home and cared for.

While expressing grave concern over violence against women, some of which ended in tragedy, Mr Yeboah said he was optimistic that the facility would help women and girls speak to the police in a manner that would increase their access to justice.

He said he was hopeful that the enabling environment offered by the interviewing room would encourage more affected people to speak up and seek justice.

Another measure, he said, was the need to focus on the root causes of violence founded on gender-based power, inequalities and gender-based discrimination.

“Addressing these causes must be a priority to all of us,” he said.

He said while GBV disproportionally affected women and girls, it also affected men and boys, although the latter often did not willingly report their ordeal.

He stressed that GBV, irrespective of the victim, was a major obstacle to gender justice, posed a serious threat to democratic development and public health and was a critical barrier to achieving the UN sustainable development goals, economic growth and peace.

“If women, girls, men and boys are not safe, they cannot be full citizens nor fully participate in the development of our society. In Ghana, the level of violence perpetrated against women and girls is alarming,” he stressed.

A child protection specialist who is in charge of the Justice for Children programme at UNICEF, Ms Hilda Mensah, said the interviewing room concept would strengthen the paths to justice for thousands of victims of GBV and make justice accessible to the most vulnerable groups in society.

She said from the beginning of the year, one in five girls between 15 and 19 had reported experiencing at least one act of sexual violence in Ghana.

She said many of those victims were unable to speak about their ordeal because the law enforcement agencies lacked the space to make the victims speak up freely.

The private interview room, she said, would provide space for girls and boys to feel safe and more comfortable when telling their stories.

He said the Madina DOVVSU handled cases of GBV in Madina, Adenta and their environs.

The facility is one of three interviewing rooms being sponsored by UNICEF, with support from Global Affairs Canada.

Apart from Madina, the Kasoa and Ashaiman DOVVSU in the Central and the Greater Accra regions, respectively, have also benefited from the interviewing room project.