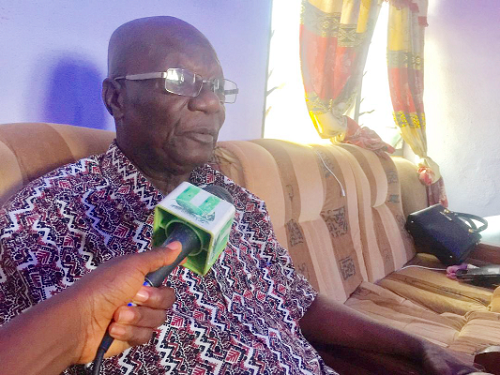 Nana Kodwo Maana I, Gyasehen of Komenda- Domenase appealed for a police station for the community
30.5k Shares

Residents of Domenase, a farming community in the Komenda-Edina-Eguafo-Abirem Constituency in the Central Region, have appealed to the government to provide basic amenities to improve their wellbeing.

Addressing the Domenase Youth Conference, an annual meeting organised to address challenges in the community, the Secretary to the planning committee of the conference, Mr Isaiah Otoo, appealed to the authorities to help construct a health facility that would facilitate effective healthcare delivery in the community.

“We face a lot of challenges when it comes to issues related to health. Our people in need of urgent health services are compelled to travel to nearby communities to receive medical attention,” he said.

The Gyasehen of Komenda-Domenase, Nana Kodwo Maana I, lamented the high rate of insecurity in the community, stressing that the situation was as a result of the absence of a police station in the community.

He said insecurity had been on the rise in the community and the situation needed a swift intervention.

“To maintain sanity in this community, we appeal to the authorities to help us establish a police station here that would put people on their toes and to an extent clamp down on some of these ill behaviour among the youth,” he said.

He charged the Coastal Development Authority (CODA) to complete projects it had initiated in the community.

He said CODA had started putting up toilet facilities in the community but they had been abandoned.

“We have a toilet facility which was started by CODA about two years ago but it has been abandoned for no obvious reason. We have approached them but they have not given us any positive response on when they will complete the facility which is about 90 per cent done,” he stated.

He stressed that when completed, the toilet facilities could address sanitation and open defecation challenges in the community and the region at large.