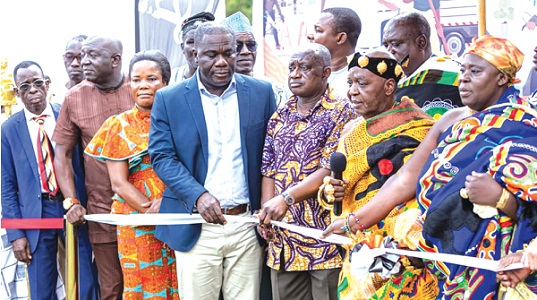 AngloGold Ashanti (AGA), Obuasi Mine, has launched a 10-year socio-economic development plan to help improve the lives of the people of the Obuasi Municipality and Obuasi East District, respectively.

The plan is to contribute towards a resilient local economy and sustain the local communities.

It is also to help grow local businesses with varied supports, build capacities of indigenes and make them self-reliant.

The plan is built on the successful implementation of a three-year social management plan to diversify and sustain the local economy beyond the mines.

Beyond the two assemblies, the plan is to cover all of AGA’s host communities, traditional capitals of the paramount and divisional stools, to improve the socio-economic wellbeing of the people.

The Senior Vice-President, Ghana and Tanzania Business Unit, AGA, Richard Jordinson, said at the launch in Obuasi last Saturday, that the 10-year development plan would ensure that all stakeholders benefited from a viable and secure mine.

“We will continue to pursue strategic relationships with our stakeholders to build resilient and socio-economically self-sustaining communities through improved social development, diversified and sustained local economy and improve partnerships,” he said.

The mining firm has spent $1028.59 million since the inception of the Obuasi redevelopment project, out of which 84 per cent has been spent on Ghanaian companies, some of which are Obuasi-based.

Mr Jordinson expressed the hope that with the collaboration of stakeholders, including government, the plan would succeed.

The Ashanti Regional Minister, Simon Osei-Mensah, said the multiplier effect of the plan would transform the lives of the people and expand their businesses.

He promised that government would do everything possible to ensure that it benefited the people economically.

He announced that royalties from the mine were currently being deposited into the Minerals Development Fund to ensure that it was used for its intended purpose.

The Adansihene, Opagyakotwere Bonsra Afriyie II, urged the communities to cooperate with the mine for the programme to succeed, while urging the government to be transparent in showing what the royalties were being used for.