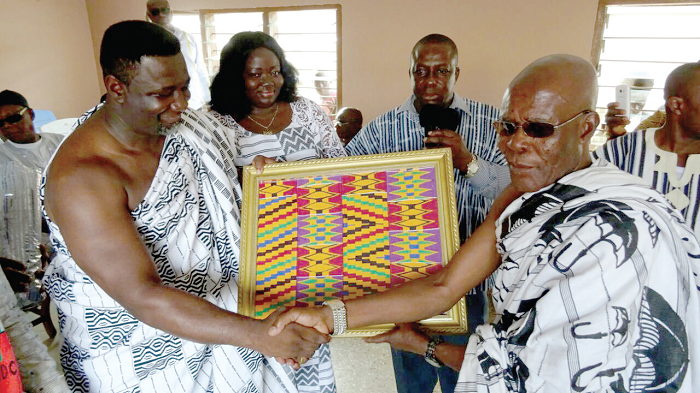 The deputy Ashanti Regional Minister, Mr Andy Osei Okrah, has been honoured by the people of Adanwomase in the Kwabre East District in the Ashanti Region on his appointment as deputy minister.

At a gathering at Adanwomase, the Nkosuohene, Nana Kwakye Berko Dankagyeabuor, on behalf of nananom in the area presented a kente cloth as gift to honour the deputy minister.

He said there was no doubt that Mr Okrah was a native of Adanwomase and that nananom and the people were proud of their “illustrious son’s” achievements.

He said though there were other top people at the helm of affairs in both public and private sectors born and nurtured in the area, it was important for the youth in the area to emulate the sterling performance of the deputy minister.

After congratulating the deputy minister on his new portfolio, he, on behalf of nananom and the people, requested that a public toilet be built for the people of Adanwomase while roads needed attention should be repaired and electric poles and new electric meters fixed for the people to have access to electricity.

Mr Okrah in the company of the Kwabre East District Chief Executive (DCE), Mr Adams Iddisah, and a former DCE for Amansie West, Mr Charles Oti-Prempeh, expressed gratitude to nananom for the honour done him.

He said he would never forget the honour done him and his family, especially his father, Akwasi Addai Okrah.

He said the ruling National Democratic Congress (NDC) government had done a lot for the people in the area and asked that they voted for President John Mahama to enable him to continue the good works his government was doing for the people of Ghana.

He said it was necessary for him as the NDC campaign co-ordinator for Election 2016 in the region to pay a courtesy call on nananom and seek their blessing before he begins vigorous campaigning.

He said when voted for, needs such as public toilets, poor roads, electricity would be provided.

He said while the people supported him to vote for President Mahama, they should as well vote for Adams Iddisah as the NDC parliamentary candidate for Kwabre East.