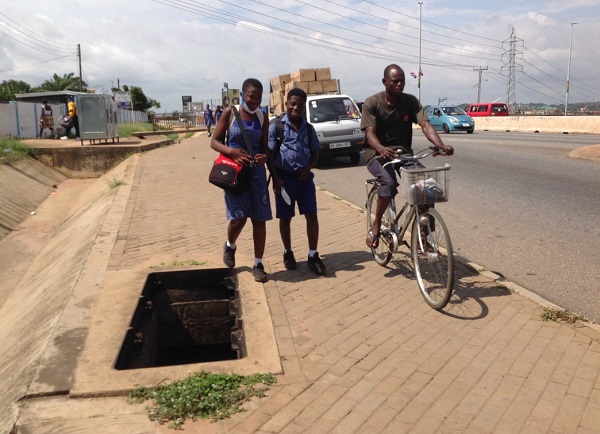 Uncovered telecommunication chambers in parts of Accra have exposed members of the public, particularly pedestrians, to danger.

The underground cable access chambers have wide openings and are mostly found in the middle of pedestrian walkways, compromising the safety of the public.

With no barricades or tape cordons around them, the underground vaults, embossed with GT or P&T inscriptions, often become flooded or submerged at the least rainfall in Accra.

In its November 12, 2018 edition, the Daily Graphic published a story headlined: “Life amidst risk: Storm drains remain uncovered”, to draw the attention of Vodafone Ghana to the threat its underground utility vaults and those of the Electricity Company of Ghana (ECG) and the Ghana Water Company Limited (GWCL), as well as uncovered storm drains, posed to pedestrians and motorists alike in the capital.

One and a half years on, the companies seem to have done little to cover their utility vaults, in spite of the fact that they have become potential death traps.

At various places in Accra, the uncovered Vodafone underground chambers especially are commonplace.

At the Dome CFC Estate, the Achimota Old Station, the Police Training School, Avenor, West Ridge, the Central Business District, the Tema Station, Adabraka and the National Theatre, a number of the Vodafone chambers are only partially covered, others have their metal lids shifted, while some others still have their covers completely removed.

At the Dome CFC Estate, the round lid covering the company’s underground chamber is not in place.

“Just about a month ago, some workers of Vodafone came to work on cables underground, but they failed to place the lid back on the chamber and abandoned it. Now any child can fall into this hole and be killed or maimed,” Ms Rose Oteng, an egg seller at CFC Estate, lamented.

About 700 metres away are two other Vodafone uncovered underground chambers right in the middle of a bus stop close to the entrance of the CFC Estate, with tree stumps tucked into them to warn particularly motorists and pedestrians of danger.

Mr Ebenezer Lamptey, an employee of Accra Brewery Limited, expressed disgust at the sight of the uncovered chambers as he walked by them, recalling how he had lost his uncle who had fallen into a similar hole at Akosombo 10 years ago.

“My uncle, who was a very healthy man, had closed from work and was on his way home when he fell into a hole a company had dug and abandoned, without any barricade to serve as a warning to passers-by.

“He broke his thigh and never recovered until he died. Nobody should be killed in the manner my uncle died,” he said and appealed to city authorities to ensure that companies that constructed underground chambers managed them better.

At the Achimota Old Station, passengers and hawkers walked past one of the open underground chambers right in the middle of the pavement.

A food vendor, Mrs Cecilia Oppong, said they had made several appeals to the assembly member to have the chamber covered, but nothing had come out of their appeals.

“There is no way such dangerous holes in Accra must be encouraged, and those who are responsible for them must act fast to avert any harm,” Mrs Lydia Oppong, a public servant who had visited the Greater Accra Regional Hospital, Ridge, said.

Along the pedestrian walkways from the Ghana Police Training School to parts of Avenor, covering a distance of about 500 metres, three uncovered underground vaults could be seen, with pedestrians, cyclists and others passing them — some overgrown with weeds.

When contacted, the External Communications Manager of Vodafone Ghana, Mr Daniel Asiedu, said while Vodafone’s chambers were always deployed and installed with covers, the covers were either stolen by scrap dealers or damaged by cable thieves who broke them to search for copper cables.

“Once we are alerted to an open chamber, we make arrangements to replace the stolen or damaged cover,” he said.

To proactively address the challenge, he said, the company had recently swapped a significant number of its metal chamber covers nationwide with concrete covers.

“Additionally, we take steps to immediately barricade any open chamber with safety barrier when the open chamber is brought to our attention, while we work to quickly cover it with a concrete cover. We will continue to cover every detected open Vodafone chamber.

“We wish to state that some of the chambers belong to other utility service providers. We would also like to use this opportunity to call on the public to reach out to us when they come across any open Vodafone chamber by dialling 155 from any Vodafone number or 0302 200256 across all networks,” he added.

The Head of Public Relations at the Ministry of Roads and Highways, Dr Winnifred Nafisa Mahama, said the ministry had been liaising with the telecommunication firms and utility agencies to replace stolen underground chamber covers.

“We are appealing to all citizens to help us apprehend those stealing the covers and destroying other road furniture," she said.

The pledge of Goal 11 of the Sustainable Development Goals (SDGs) requires efforts to make cities and human settlements inclusive, safe, resilient and sustainable, as it provides an unparalleled opportunity for the attainment of collective and inclusive progress and the achievement of sustainable development in the world.

This requires businesses to ensure that their operations and activities do not impact negatively on providing a safe society for people, particularly women and children.