‘Deal with Chinese who breach the law’ 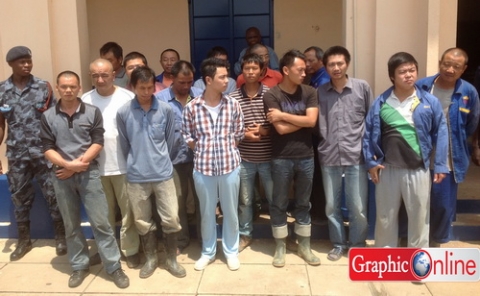 The Chinese government says it fully supports Ghana’s efforts to deal with Chinese nationals who breach the laws of the country in their quest to pursue benefits through illegal mining.

It, therefore, called for stronger collaboration with Ghana in its determination to fight the menace of illegal mining involving Chinese in the country.

At a meeting in Beijing last Tuesday with journalists from 27 African countries who are currently on a media exchange programme in China, the Director of the Department of West Asian and African Affairs (DoWAAA) at the Ministry of Commerce, Mr Wang Dong, said dealing with the wanton destruction of the environment through illegal mining required greater cooperation between Ghana and China.

“On the one hand, the Chinese government strongly supports the fact that the law enforcement agencies in Ghana should do what you need to do to punish those who break the laws.

“We will allso supervise the Chinese companies, so that they fulfil their social responsibilities. We need stronger cooperation to handle these problems,” Mr Wang said.

Responding to a question by the Daily Graphic on whether the Chinese government was aware of the involvement of some of its nationals in illegal mining activities in Ghana and what was being done to stop it, Mr Wang said China had great respect for the laws of its partners, including Ghana, and always told its nationals living in the country to be law-abiding.

Describing the menace as a development issue, he said: “China fully respects the laws and regulations of our partners, including Ghana. We are paying a lot of attention to the protection of resources and the environment of the country and we also require Chinese companies and citizens to protect the environment and abide by the laws to become good partners there.”

In 2013, Mr Qiu Xuejun, who led a Chinese delegation to Ghana, had said at a press briefing in Accra that: “I think there is illegal collaboration between the Chinese gold miners and some Ghanaians, showing that the problem is deeply rooted. So it takes the two governments to work closely together to solve the problem.”

The arrest followed a complaint by the Ghana Water Company Limited that its water source had been polluted by illegal mining activities.

Currently, the people of Kyebi have water challenges because of the shutdown of their water treatment plant due to the extensive pollution of water bodies from galamsey operations.

Mr Wang stated that the Chinese government always required its citizens to abide by the laws of countries they worked in by protecting the environment and also living up to their social responsibilities.

“According to our understanding, most of the Chinese companies pay a lot of attention to environmental protection and sustainable development of countries they work in,” he said.

For instance, Mr Wang said during the construction of a railway project in Kenya, Chinese companies worked with animal protection companies to protect animals whose habitats were impacted by the project.

He expressed hope that infractions of the law by individuals will not affect the bond of cooperation between China and Ghana.