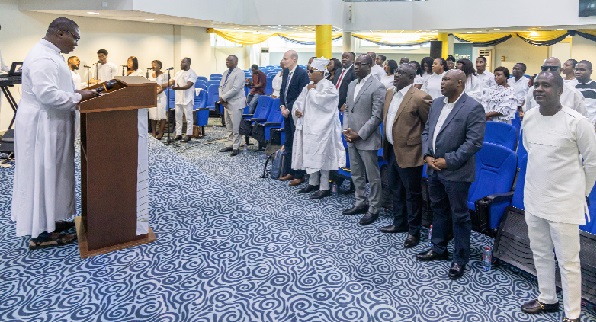 The Development Bank Ghana has commemorated its first anniversary with a thanksgiving service and a call on its partners and staff to continue to work together for greater success after its foundation-building first year.

The non-denominational service marked one year since the new development bank received its banking licence from the Bank of Ghana.

It was attended by the leadership and staff of the bank, and representatives of the bank’s partner institutions, including Kreditanstalt Für Wiederaufbau (KfW), Consolidated Bank Ghana (CBG), CalBank, Access Bank, Ghana Incentive-based Risk-sharing System for Agricultural Lending (GIRSAL), Association of Ghana Industries (AGI) and Fidelity Bank.

In his sermon, the Rt Rev. Fr Anthony Afriyie-Amponsah, a lecturer in Psychology of the University of Ghana, shared a message on the need for each member of staff to contribute towards the bank’s goal.

He called for teamwork, discipline and appreciation for the efforts made and results achieved by staff., and challenged the staff and the bank’s partners to work together in unity, focused on delivering DBG’s agenda, and prayed for God’s guidance for the bank’s leadership.

According to its laid-out agenda, the DBG’s first year has been devoted to building the required foundation for effectively undertaking its mandate of playing the role of a catalyst for the growth of the private sector, specifically small and medium enterprises (SMEs).


The bank has so far released GH¢245 million through its partners for the funding of SMEs.

The DBG’s Chief Executive Officer, Kwamina Duker, called on staff and partners to work together to win together.

He thanked the partners for their support and commitment, urging them to continue to deliver same in the years ahead.

He also congratulated the staff of DBG for a successful first year, and stressed the need to continue to work efficiently together., adding that while the DBG was introduced during difficult times, it was for such challenging times that a catalyst for growth was needed.

He explained that the bank had, in spite of the challenging environment, put in place a solid foundation on the back of which it would be rolling out more partnerships with SME-focused institutions and a lending programme, which included technical support.

The DBG acts as an enabler for businesses in Ghana and as a long-term capital provider in the market with a mission to foster strong partnerships to finance economic growth, create jobs and build capacity for SMEs, and to provide long-term financing and de-risking services, underpinned by technology and evidence-based research and insights.