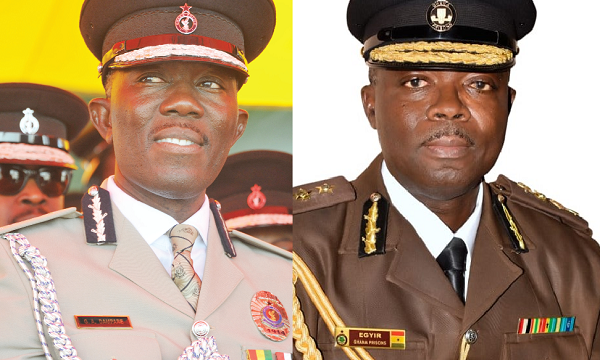 Leadership at the Ghana Police Service and the Ghana Prisons Service will change beginning Monday, August 2, as two new persons take over the mantle at the two state institutions in acting positions.

Last Friday, Mr James Oppong-Boanuh, the then IGP, handed over the flag of command to Dr Dampare at a pulling-out ceremony in honour of the outgoing IGP, a lawyer, who served the service for 33 years.

The 51-year-old Dr Dampare now becomes Ghana’s 30th IGP and is the youngest acting IGP to be appointed in the Fourth Republic and the eighth youngest since Ghana gained independence.

Prior to this appointment, Dr Dampare was the most senior police officer (in terms of ranking) after the just retired IGP, having served in the service for 31 years.

He joined the service as a Constable in December 1990, aged 20, and rose through the ranks to become Commissioner of Police (COP), 24 years later in 2014, aged 44, a rank he held until his new appointment.

Dr Dampare’s quick rise through the ranks was aided by his completion of various courses and programmes of study, including becoming a chartered accountant and member of the Association of Chartered Certified Accountants (ACCA).

The acting IGP, who was born on July 14, 1970, holds a Doctor of Philosophy (PhD) degree in Finance and became a chartered accountant at the age of 25 while serving as a police constable about two decades ago.

The acting IGP assumes office at a time of many unresolved high-profile crimes, as well as a surge in armed robbery and murder, many of which appear to be contract killings, and sophisticated cyber crimes.

The Ghana Prisons Service plays the important role of keeping jailed convicts and remand prisoners in confinement and also reforming them, after the police had completed their work for the courts to make a determination.

Mr Egyir, therefore, takes office as acting Director-General of the service at a crucial time when the prisons are overcrowded, COVID-19 has rendered prison protocols cumbersome and feeding stipends remain nothing to write home about.

He has the responsibility of leading his team to bring vibrancy into the service, canvass for improved services for inmates and personnel of the service, as well as infrastructural development for the service.

He takes over from Mr Patrick Darko Missah, who took his terminal leave from today, with his retirement from the service set to begin on October 16, this year.

Born in 1964, Mr Egyir is a seasoned Prison Officer who, until his appointment, was the DDGP in charge of Operations.

He has 26 years’ work experience with the service, including a five-year duty tour with the United Nations Department of Peacekeeping Operations in The Sudan and South Sudan as Corrections Advisor and Military Detention Manager, respectively.

He was enlisted into the service on December 5, 1995 as an Officer Cadet and commissioned as a Deputy Superintendent of Prisons on July 5, 1996.

He also served as the Chief Agricultural Officer of the service.