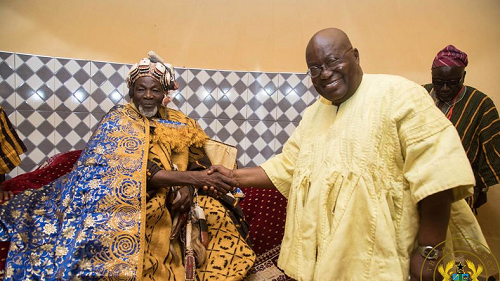 President Nana Addo Dankwa Akufo-Addo says bringing peace to Dagbon has been one of the greatest achievements of his first-term.

President Akufo-Addo said this when he delivered the State of the Nation Address in Parliament on Tuesday January 5, 2021 before the dissolution of the 7th Parliament on January 6, 2021.

He said he is happy that the people of Dagbon now live their normal lives.

For him, government’s intervention to bring peace to Dagbon has been successful, saying “Our efforts bore fruits.”

He has, therefore, commended the three eminent chiefs, namely the Asantehene, Otumfuo Osei Tutu II; Yagbonwura, Tuntumba Boresa Sulemana Jakpa I; and Nayiri, Naa Bohogu Abdulai Mahami Sheriga for their diverse roles in bringing to an end the protracted chieftaincy dispute at Dagbon.

For President Akufo-Addo, “Peace has been restored to Dagbon” and that his government will continue to work to sustain the peace of Dagbon.

He also urged the indigenes of the area to refrain from the use of violence to resolve issues, praising the people of Dagbon for their wiliness to allow peace to prevail in the area.

Yaa Naa Yakubu Andani II who was the King of Dagbon, the traditional kingdom of the Dagomba people in northern Ghana from 1974 was killed on March 27, 2002.

After his (Yaa Naa Yakubu Andani II) death, Dagbon became a centre of chieftaincy dispute and attempts by successive governments to resolve the issue proved unsuccessful until 2019.

The Committee of Eminent Chiefs, on November 16, 2018, made a declaration to bring finality to the decades-old Dagbon conflict between the Abudu and the Andani Royal families when it presented a road map to peace in the troubled kingdom to President Akufo-Addo at the Jubilee House in Accra.

The committee was set up by former President John Kufuor in 2002 to find a lasting solution to the protracted Dagbon chieftaincy dispute after the killing of Yaa Naa Yakubu Andani II in Yendi in March 2002.

The road map gave the Abudu Royal Family two weeks to perform the funeral of Yaa Naa Mahamadu Abdulai IV from December 14 to 28, 2018, after which the final funeral rites of Yaa Naa Yakubu Andani II would take place from January 4 to 18, 2019.

The latter's funeral was delayed for a week due to some misunderstanding.

With the funerals of the two Yaa Naas over, the four kingmakers of Dagbon, who include Kuga-Naa Abdulai Adam and the Gushie Naa, consulted the oracles to guide them in the choice of the right candidate for the ‘Namship’ before settling on the Paramount Chief of the Savelugu Traditional Area, Yoo Naa Abukari, who was subsequently enskinned.