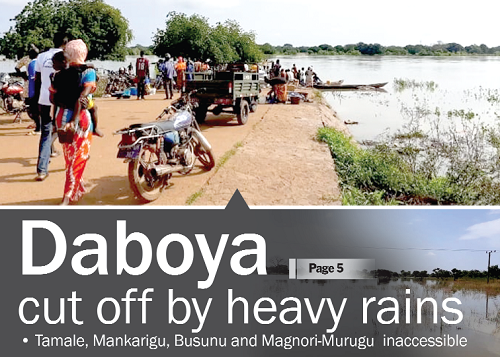 Daboya, capital of the North Gonja District in the Savannah Region, has been cut off from the regional capital, Damongo and the other five districts following days of torrential rainfall in the area.

The four routes leading to Daboya from Tamale, Mankarigu, Busunu and Magnori-Murugu are all inaccessible and one has to use a canoe to access the area.

According to the people living in the area, the Tachali bridge, which connects Daboya to Tamale and other parts of the country has also been submerged by flood water.

The Assembly member for the Daboya West Electoral Area, Mr Mahama Shaibu, said so far about 500 farmers whose farms were destroyed by the floods had registered with him, as well as 50 others whose homes were flooded.

In view of the floods that have affected several communities and destroyed farms, residents whose main occupation is farming are in dire straits as both their livelihood and food have been destroyed.

In response, the Savannah Regional Minister, Mr Muhazu Saeed Jibril, said the Regional Coordinating Council (RCC), in collaboration with National Disaster Management Organisation (NADMO) and Operation Thunder Bolt, was extending support to the people in the wake of the floods to cross the Busunu-Tachali Bridge that was affected safely to their various destinations.

The affected residents, now at the mercy of the government through the NADMO and benevolent individuals, have appealed for emergency relief items and food to enable them to survive in their current state.

As at the time of filing this report at 12.45 p.m. yesterday, Daboya remained inaccessible, while officials of NADMO were in the area with life jackets and engine boats to help residents who cannot commute by road to do so through the flood waters that had inundated the area.

The Savannah Regional NADMO Coordinator, Mr Mohammed Tohiru, sharing his view with the Daily Graphic said no casualty had, however, been recorded.

He, nonetheless, expressed fear that the continuous downpour in the area might also affect the road at Jindapor in the Sawla-Tuna-Kalba District that links the Upper West Region to the southern part of the country.

He said the floods being recorded in the area was not due to the Bagre Dam spillage, as the Burkina Faso authorities were yet to do so, but it was as a result of torrential rains in the area and in the Upper East Region that had caused the White Volta River to swell up to overflow its banks.

The situation portends that should the Bagre Dam’s spillways be opened around this time; the woes of residents could be deepened.

Mr Tohiru said the only casualty that had been recorded in the Savannah Region occurred about three weeks earlier when an old man aged 80 years who was trying to cross a road in Damongo during a heavy downpour, was swept away by the floodwaters together with a bicycle he rode on.

Mr Tohiru said the situation had brought all activities in the Daboya-Mankarigu area to a halt, especially farming, as farmers who had their farms affected could not access them.

Meanwhile, some farmers who have had their farms destroyed by the floods are rueing their losses.

Issah Alhassan, who said his farms along the Daboya-Mankarigu road had been destroyed by the floods, lamented; "I cannot harvest anything because the crops have not reached the maturity stage.”

Another farmer, Ibrahim Mohammed, stated: "We haven't been able to recover from last year's incident which happened just around the same time," and now this.

A third farmer, who only gave his name as Yahaya, said the situation had resulted in all his food crops being destroyed and if help did not come to them now it would push them into hunger.

Residents affected by the floods have also implored the Ghana Navy to come to their aid in the transportation of goods and services.

A native of the area, Mr Mohammed Muniru Cosmos, who walked into the office of the Daily Graphic to appeal for support for the people, said economic activities in the area had come to a halt as the people could not leave the area to do business.

“Daboya, which is the capital of the Gonja North District in the Savannah Region, is now cut off from the world. On the eastern side where the Tachali bridge is, the place is flooded while on the western side from the military camp, the whole place is flooded and you have to use a boat for almost four kilometres instead of 50 metres and anybody who tries it risks their lives because there are no live jackets,” he said.

He added that the people suspected that the flooding of the area was because of the illegal harvesting of rosewood and papio trees in the last seven years.

According to Mr Cosmos, those trees used to serve as a barrier to flooding but because they had been felled, the entire district capital had become exposed.

He explained that people who had gone to Tamale and the district capital to transact business activities could not return to their homes as a result of the marauding floods that had cut Daboya off.

“So we are pleading with the authorities to get the Navy to come and support the people. NADMO should also be equipped to help the people with food items,” he said.

“The smock, business which is the main stay of the people, has stopped because people cannot take them to the market centres. Even the pits that have been dug for dying have been flooded,” he said.

Moreover, Mr Cosmos said the inland salt mining areas had also been affected by the flooding.

“So the people in Daboya need immediate assistance. The situation has been like this for about a week now and if it persists without any help, it would be disastrous for the people,” he said.

The Regional Minister, Mr Jibril said members of the Operation Thunder Bolt were still on the ground in the North Gonja District (Daboya) to help flood victims to move to safety while NADMO was able to mobilise some form of support to assist the people who were affected by the floods to lessen their plight.

Mr Jibril added that currently the regional secretariat of NADMO was conducting an assessment in Daboya to compile the list of farmlands, property and the number of persons who were affected by the floods to the national headquarters for additional support, adding that it was not only Daboya and its environs that were affected but also Bole and the Sawla-Tuna-Kalba districts.

He said efforts were also being made to fix the roads and bridges that were affected by the floods to facilitate smooth and safe transportation of goods and people in the affected districts in the region.

Mr Jibril stated that the RCC was also in talks with the Kongwura and the chief of Jindador to relocate a dam at Jindador that was closed to the main road that links the Upper West Region to the southern part of the country through the Sawla-Tuna-Kalba District, saying if the dam was not relocated it might cut off the Upper West Region from accessing the south and vice versa.

The Assembly member for the Daboya West Electoral Area, Mr Shaibu, for his part, said so far NADMO had extended some form of support to some of the flood victims in terms of non-food items such as mattresses but called for more support to ameliorate the suffering of the people.

He added that crops that were destroyed by the floods included maize, groundnuts and soya beans, as well as vegetables.

Mr Shaibu called for support for the farmers in the area of pumping machines and other farming inputs to enable them farm and harvest their produce before the rains set in and caused the floods that destroyed farmlands.

He also appealed for a temporary shelter to be put up in the district to help accommodate people displaced by the floods to put up there instead of the classrooms since school was in session, adding that the floods occurred on a yearly basis and there was, therefore, the need for such facilities to be put up so that those who had their houses destroyed during the floods could live there.

He noted that providing the people with relief items in each flooding season was not enough and called for a permanent solution to the annual flooding.